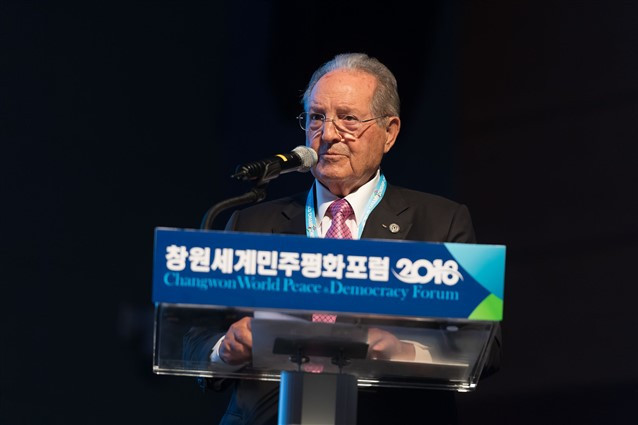 This is the day when the 83-year-old Mexican entrepreneur will finally step down from the Presidency of the International Shooting Sport Federation (ISSF) after the extraordinary span of 38 years.

Nevertheless, in an interview granted just 24 hours before this momentous changing of the guard, Vázquez Raña told insidethegames he is retiring "really satisfied and very happy".

He added with a twinkle: "I made the decision four years ago so I would not feel so surprised by the new situation."

The former Olympic shooting athlete takes satisfaction from being able to "get shooting sport to be among the 10 most-watched sports in the last few years".

"I think I have been able, with the help of [colleagues], to get our sport to the level that it is at today and strong within the Olympic Movement," he said.

"We worked very hard to have very modern, exciting finals, to have perfect electronic targets…

"All of my family, my two daughters, my son, my wife and my nine grandchildren have been involved in shooting sport."

Asked what he was most proud of from his years at the top, he replied: "All the people on the Executive Committee and the Council of the ISSF always made me feel very important.

"And I always felt so proud of them because I owe them what I am.

"I am just a normal person.

"I always listened to all the leadership because they kept me here this long."

On the decision of secretary general Franz Schreiber to step down at the same time as him, the ISSF President confided that he was initially surprised.

"I was always sure that Franz would continue being secretary general," he said.

"However, two months ago at the World Championships in South Korea, Franz spoke to me in private.

"I listened to him for half-an-hour.

"I could not believe he was withdrawing, but when I heard his reasons I accepted it because I had to agree.

"He was a wonderful secretary general with me.

"I don’t know if he would be able to work as well with other people, and I approve his decision."

Asked how he would fill his time in the future, Vázquez Raña responded, once again playfully: "I am a businessman.

"I have a lot of business.

"My son is the general director of the group so I think I will dedicate some time to just watching.

"I have a very big office.

"I will come to the office once in a while and have some fun.

"And I will watch some shooting sport on the internet."

#ISSF President Olegario Vázquez Raña opened his doors to ISSF TV, telling the story of his life-long involvement with Shooting, from how he got into the sport by chance, to his imminent retirement. Tomorrow he will step down, after 38 years in the job https://t.co/h7fdlMnojW

He also relayed a story from Jacques Rogge’s time as International Olympic Committee President which suggests that some of his commercial/political acumen has been transferred to younger members of his family.

"When one of my grand-daughters was nine-years-old, we had a World Championship here in Munich," he recalled.

"Jacques Rogge was here and my grand-daughters had their shooting accreditations around their necks.

"She said to Rogge, 'Are you the President of every sport?'

"She said, 'Oh fantastic! I will go to all the games and I will never have to buy a ticket'."

Rogge is said to have laughed for a long time.