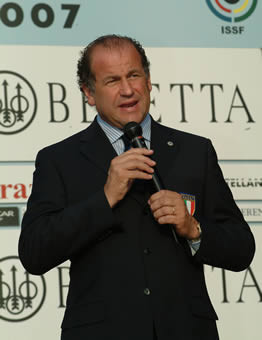 The International Olympic Committee (IOC) has reacted to an alleged death threat against one of the candidates in the forthcoming International Shooting Sport Federation (ISSF) Presidential election by enquiring whether all appropriate measures have been taken to guarantee the safety of the meeting where the vote will take place.

A successor to Olegario Vázquez Raña, the Mexican who has been ISSF President for 38 years, will be chosen at the body’s General Assembly in Munich on November 30.

Three candidates are in the running, with one of them - Russia’s Vladimir Lisin - endorsed by Vázquez Raña as his preferred successor.

As first reported by insidethegames, another candidate, the Italian Luciano Rossi, says he has received an email “alleging that ISSF officials are plotting to kill me and/or to kidnap my youngest daughter” if he does not pull out of the election.

He has informed the Italian police and asked the ISSF to do everything necessary to ensure that the General Assembly will be safe for those attending.

The IOC has now told insidethegames that it too has enquired whether the ISSF has acted to guarantee the safety of the meeting.

"It is not the responsibility of the IOC to ensure the security of International Federations’ meetings," the IOC said in a statement.

"However, as the security of the members of the Olympic Movement is a very important matter, the IOC has enquired whether the ISSF took all the appropriate measures with the German authorities to guarantee the safety of the meeting.”

Separately, the ISSF has confirmed that the issue was reported to both its Executive Committee and to the German Police on November 17.

The body says it has no other information and will make no further comment.

Lisin reacted to disclosure of the alleged threat by circulating his own statement speculating that someone was aiming to disrupt the election.

“I hope that the respective bodies will find out who is the real perpetrator and who consequently is organizing the dirty games,” the statement said.

“I am sure this will not be the last provocation and we must therefore be ready to deal with any attempts to disunite us, to create an atmosphere of nervousness and hysteria.”

The third candidate in the race, seen as the outsider, is Boutros Jalkh of Lebanon.

The General Assembly will be hosted by the Hilton Munich Park Hotel.