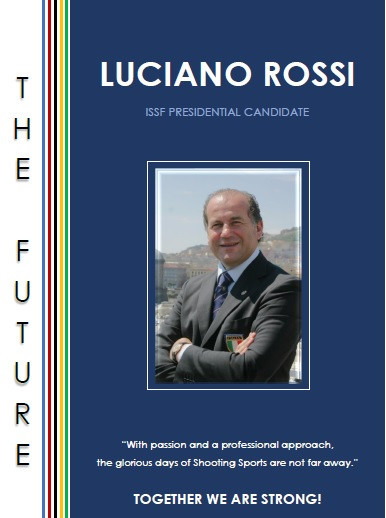 International Shooting Sport Federation (ISSF) Presidential candidate Luciano Rossi has claimed current head Olegario Vázquez Raña and Russian rival Vladimir Lisin struck a deal to exclude him from the race as he accused the two officials of "trying everything they could" to stop him standing.

The ISSF vice-president told insidethegames it was "clearly not a coincidence" that Vázquez Raña formally endorsed Lisin as his preferred successor the day after the Ethics Committee suspended him.

The Italian was initially suspended for three years, which would have ruled him out of the upcoming election, before his ban was cut to 20 weeks by the Court of Arbitration for Sport (CAS) on appeal.

The CAS ruling allowed Rossi to stand to replace Vázquez Raña, whose 38-year term at the helm of the ISSF will come to an end during the General Assembly in Munich on November 30.

Rossi claimed the decision from the ISSF Ethics Committee was a "harsh and unjustified attack driven by political antipathy towards me".

The CAS award following its decision to dramatically reduce his suspension paints a picture of an orchestrated attempt from the Executive Committee to ban Rossi from the sport amid a row over changes to the shooting events at Tokyo 2020, which culminated in an Extraordinary General Assembly held in Munich last year to discuss the alterations.

The CAS ruling also confirmed Rossi had committed "serious violations" of the governing body's Ethics Code as he had failed to disclose his ownership and indirect ownership of companies which manufacture clay targets used in double trap shooting - axed from the Tokyo 2020 programme by the ISSF.

"This is clearly not a coincidence, and it shows that he made a deal with Mr. Lisin.

"I take responsibilities of mine, and indeed I made a formal error not to properly address my minority shareholding participation in Tora SRL.

"So what I would expect from the members of the Executive Committee is that they will take responsibilities of their action and of what they did against me.

"They will not do that, but I will not fight over this.

"I respect everyone, and I am committed more than ever to ensure that the ISSF will become an International Federation governed in full democracy and transparency where everyone has a right to say, especially the General Assembly."

Rossi, standing against Lisin and surprise candidate Boutros Jalkh of Lebanon in the Presidential election, has become the latest to release his manifesto, in which he vows to strengthen the popularity and credibility of shooting sports around the world and promote the values of the sport if he is elected.

The Italian also criticises the current state of the ISSF's governance, claiming there is a "lack of openness and trust" and that the administration is "inflexible" and has a "lack of initiatives".

He claims the sport is at stake due to the ISSF's "lack of interest in participation in Commonwealth Games, Youth Olympic Games and Summer Universiade".

In his manifesto, Rossi makes numerous promises of increased funding and financial support for athletes at ISSF events, but does not provide concrete examples of how the extra money will be raised.

He also says he will ensure the disciplines cut from the Olympic programme, such as double trap, remain part of World Championships and World Cups and claims he will create a bonus fund for medallists.

Establishing a new department to strengthen relations with International Federations which share a common ground - such as the International Biathlon Union and the International Paralympic Committee - and increasing the presence of athletes in decision-making are among other key aims.

Another plan would be to launch a new branding for the ISSF as part of his mission to enhance the attraction of major shooting events.

"Should you feel close to my vision and interested in the new ISSF structure, you are cordially invited to an open collaboration to
improve conditions for our beloved sport," Rossi writes in his manifesto.

"This programme will address the serious issues that are nowadays threatening Shooting Sports and ensure to this beautiful sport the glorious future it deserves.2