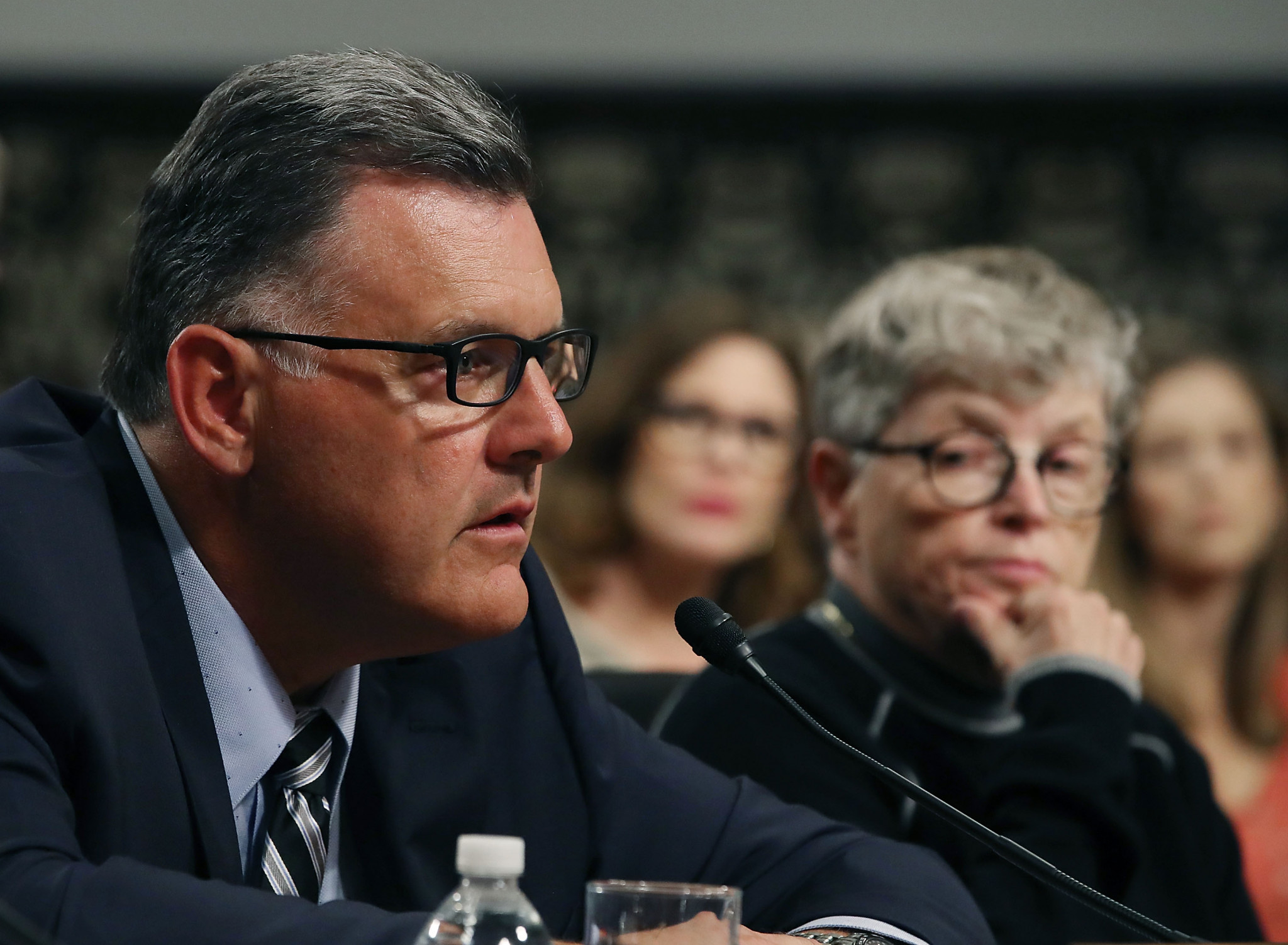 The 54-year-old was arraigned before State District Judge Hal C. Ridley at the Walker County Courthouse in Huntsville in Texas.

Penny, accompanied by his attorney Rusty Hardin, made no comment as he left.

He allegedly removed documents from a training centre during the investigation into Nassar, USA Gymnastics' disgraced former team doctor.

According to an indictment against him, he did this with "the purpose of impairing the ongoing investigation by destroying or hiding the documents".

The files, allegedly taken from Karolyi Ranch, the training facility in Texas where accusers say some of Nassar's abuse occurred, are yet to be recovered.

Penny, who reportedly faces between two and 10 years in prison if found guilty, claims that he has never seen the documents and that they have never been in his custody.

Hardin said the case represents "a colossal misunderstanding" on the part of Walker County investigators.

"I have a client who is charged with either altering or concealing documents that he has never seen and never had anything to do with, other than asking somebody to take them to the headquarters of the company he was President of," he was reported as saying by the Houston Chronicle.

"I think we're going to find that ultimately the conclusion will be that Steve Penny never had anything to do with whatever happened to these documents, wherever they are."

Hardin said that Penny, on the advice of USA Gymnastics attorneys, instructed that documents be transferred from Karolyi Ranch to USA Gymnastics' headquarters' in Indianapolis "for safekeeping".

Asked if Penny himself received the documents, he replied "no".

"My guess is going to be that we will find out they were given to some lawyers," Hardin added.

"I would not be surprised if they exist unaltered somewhere.

"All I know is that Steve doesn't know anything about them."

Officials claim the documents were removed after investigators visited the Karolyi Ranch in search of evidence and were told they could not enter without a search warrant.

"We think these documents are crucial to the continuing investigation of what happened at the Karolyi Ranch, but we have no idea where they are," Stephanie Stroud, the first assistant district attorney, was reported as saying by the Houston Chronicle.

"We believe they were delivered to Mr Penny at USA Gymnastics' headquarters in Indianapolis, based on the Senate testimony… and they have not been seen since."

The sisters both claim Nassar assaulted them at the Karolyi Ranch during their time on the US national team.

In the case of Tasha Schwikert, it is alleged she was also assaulted during Sydney 2000.

The lawsuit is seeking unspecified damages under the Racketeer Influenced and Corrupt Organizations Act.

"It's just an awful, awful culture," Tasha Schwikert was reported as saying by the Houston Chronicle.

"I don't think they realise what it does to the athletes long term."

Penny's recent arrest was the latest twist in a scandal which has rocked American sport, with USA Gymnastics and the USOC both facing questions about whether they could have prevented the attacks.

Dozens of women have reported abuse at the hands of Nassar.

She was immediately embroiled in controversy after a tweet of hers from September, when she blacked out the Nike logo on a pair of trainers in protest at the sport giant's partnership with American football player Colin Kaepernick, emerged.

Kaepernick sparked a national debate in 2016 for repeatedly kneeling during the national anthem before games, an act he said was to draw attention to institutionalised racism against African Americans.

The tweet was criticised by American gymnast Simone Biles, an African American athlete and a winner of four Olympic gold medals at Rio 2016.

Last month, Mary Lee Tracy was appointed as elite development coordinator for the women's programme but soon left after claims she had "supported Larry Nassar and victim-shamed survivors".