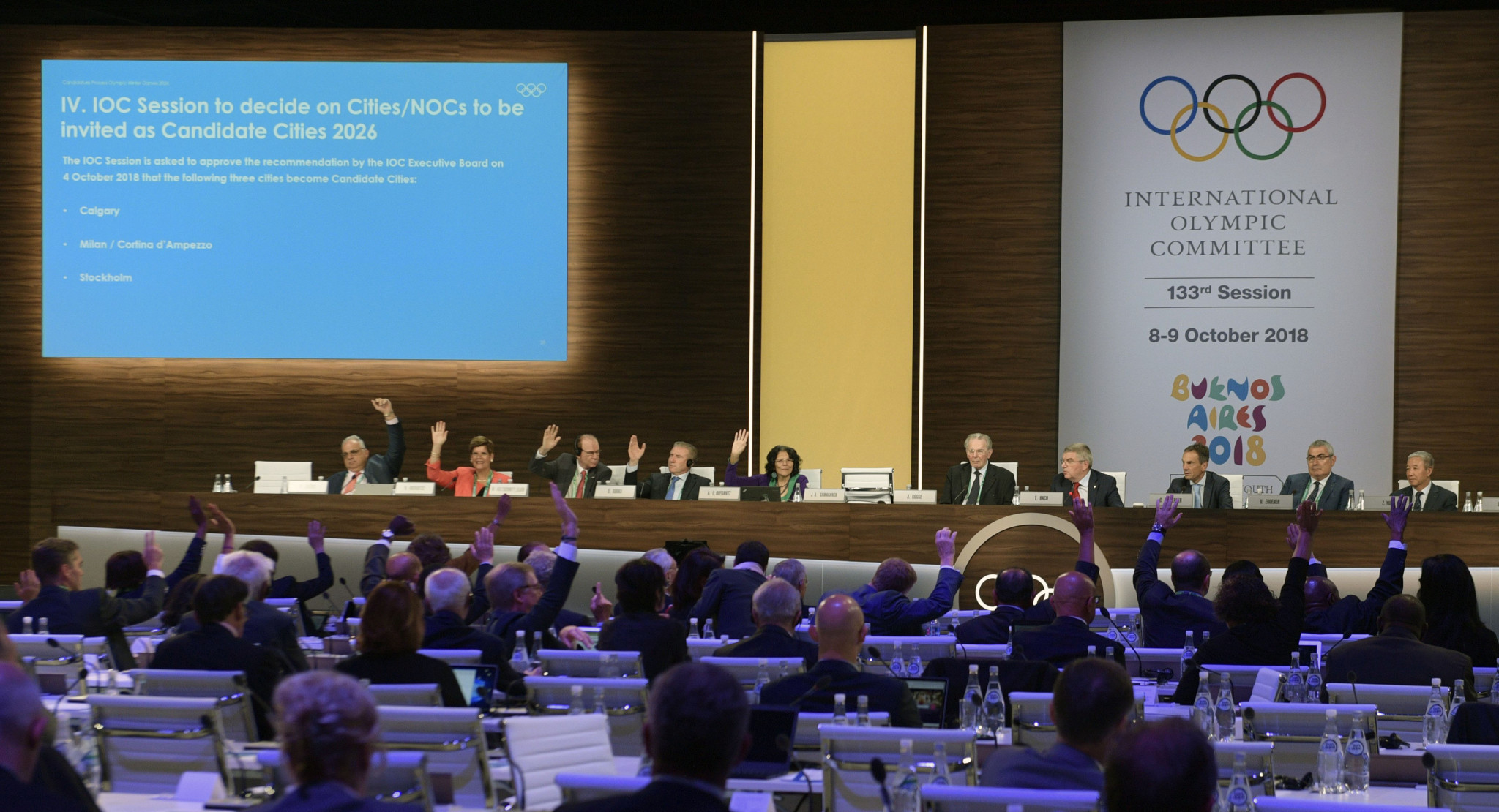 Calgary, Stockholm and a joint attempt from Milan-Cortina d'Ampezzo have been officially confirmed as the three candidates in the race for the 2026 Winter Olympic and Paralympic Games by the International Olympic Committee (IOC) Session here today.

The approval from the Session followed a recommendation from the IOC Executive Board, who dropped the Turkish city of Erzurum from the race during a meeting here last week.

The three cities are the survivors from a campaign which has seen several bids ended by a combination of referendum defeats and political opposition.

The Session was scheduled to take place in Milan in September but the Italian city has been replaced by Lausanne following the approval of the joint bid by the membership today.

IOC vice-president Juan-Antonio Samaranch, head of the 2026 Olympic Games Working Group, was full of praise for the three candidacies despite the doubts which continue to linger over their respective bids.

"All of them have a great plan and concept," said Samaranch.

"Each of them would help us in the future to press in that direction.

"They have perfect infrastructures and competence.

"Each of the three would be an ideal partner for us."

Delegations from Calgary, Stockholm and Milan-Cortina d'Ampezzo were all present at the IOC Session here today.

Calgary is facing a key public vote next month, with a plebiscite, which could torpedo the bid, due to be held in the city on November 13.

Calgary 2026 chief executive Mary Moran claimed they were confident of a positive result and insisted they had been forthcoming with the general public following an alleged lack of transparency from the bid corporation.

"A lot of people think with their heads so we are trying to convey the math to them which is about the legacy and this being for the next generation," Moran said.

"I would say we have gone through a very rigorous process and we have put our entire drafting plan out in front of the community.

"I suggest that we have shared more information that most jurisdictions have in the past.

"We are very comfortable with the information we have given."

Stockholm, meanwhile, which staged the Summer Olympic Games in 1912, continues to lack support from either the Swedish Government or City Council.

"We continue our very positive dialogue and cooperation with everyone back home in Sweden," bid chief executive Richard Brisius said.

"We have a process in place and it is going forward just as we wish.

"Now we work towards the next big step of the submission of the candidature file and we are pretty ready with that.

"We are still trying to perfect it so it is just right for us."

Concerns also remain over the Italian attempt as the country's Government has refused to underwrite the bid, while Turin was initially due to be part of the candidacy before it dropped out following a row over the lead city.

Italian National Olympic Committee President Giovanni Malagò claimed this would not be an issue as Milan and Cortina would have enough financial might between them to fund the project.

The IOC Working Group report, published by the IOC today, also calls on Italy to use a sliding centre outside of the nation rather than an existing facility in Cortina, which the group claimed required "major construction work".

Innsbruck in Austria and St Moritz in Switzerland have been highlighted as possible alternatives by the IOC.

IOC President Thomas Bach revealed here earlier this week that candidate cities have been urged not to build new venues for bobsleigh, skeleton and luge owing to their high costs and technical complexities.

Bach also claimed there was "no plan B" for the IOC if the problems with the three candidates end up scuppering their respective bids.