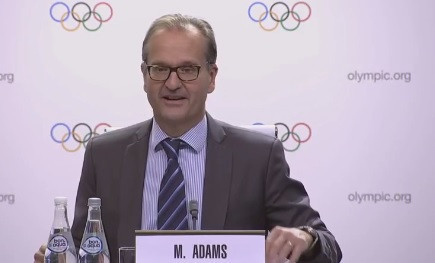 The IBU were given a series of demands by the IOC in order for the payments to resume.

The election of Dahlin, winner of a landslide election vote over rival candidate Baiba Broka last month, satisfied one of the conditions.

A lack of a commitment from the IBU to sign up to the International Testing Agency (ITA), the new umbrella drug-testing body, appears to be the main stumbling block.

The IBU are considering allowing the ITA to take over their anti-doping operation but have not officially signed up.

Reports on ethics, anti-doping, the Laboratory Information Management System (LIMS) database obtained from the Moscow Laboratory and "related data disclosed by the World Anti-Doping Agency (WADA)"  - the other criteria outlined by the IOC - were sent by the IBU before last month's deadline,

A summary of each report was discussed by the IOC Executive Board during a meeting here.

The IOC asked for a "detailed summary" of the action taken by an IBU working group which is analysing LIMS data with a view to sanctioning athletes involved in Russia's doping scheme.

The IBU remain the only Winter International Federation to sanction an athlete - Ekaterina Glazyrina - based on evidence commissioned or obtained by WADA.

The results of an audit of the IBU's anti-doping programme carried out by the Institute of National Anti-Doping Organisations, which has already been conducted, must also satisfy the IOC.

The audit praised the IBU for their anti-doping operation but urged the governing body to be more transparent in dealing with future cases.

"The tone was largely positive and it was felt the new President was heading in the right direction," IOC Presidential spokesperson Mark Adams said.

"I think we still want to wait and see to get more reassurance that all of the changes will be passed through."

Adams added there was no strict timeline in place but claimed the situation should become clearer after the IOC hold meetings with the IBU and its new President.

German broadcaster ARD and newspaper Bild reported that a confidential WADA report claims that Besseberg, 72, was offered paid hunting trips and visits to prostitutes while in Russia in an attempt to influence him.

Suggestions of bribery and corruption in the bidding process for the 2021 World Championships, a race controversially won by the Russian city of Tyumen, also emerged following the opening of the criminal investigation