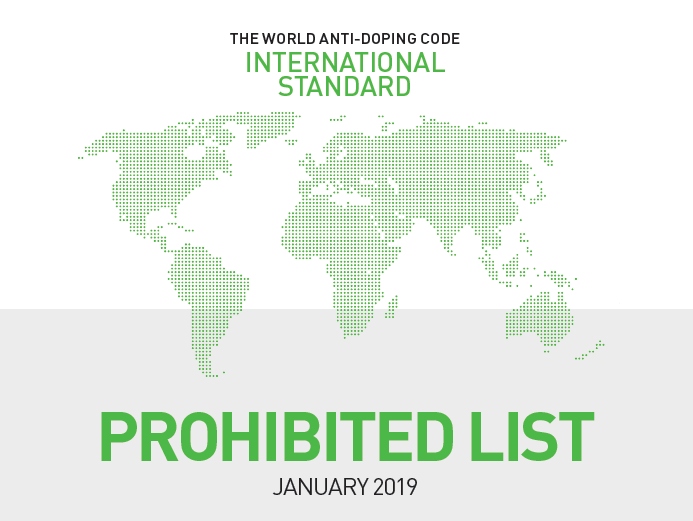 Minimal changes have been made to the World Anti-Doping Agency (WADA) Prohibited List for 2019 following this year's version.

WADA state the list follows their annual revision process which began with an initial meeting in January.

The organisation said it followed an "extensive nine-month process".

The process included WADA's list expert group gathering information and circulating a draft among stakeholders, as well as taking submissions into consideration.

A review was then carried out by WADA's Health, Medical and Research Committee, who then made a recommendation to the Executive Board.

"Updated annually, it is one of the cornerstones of the global anti-doping programme.

"Every year, we review the list in consultation with a wide range of stakeholders.

"It is vital that we stay ahead of those that endeavour to cheat the system so in reviewing the list, experts review sources such as scientific and medical research, trends, and intelligence gathered from law enforcement and pharmaceutical companies."

WADA have made alternations to substances in the anabolic agents, peptide hormones and growth factors, beta-2 agonists, hormone and metabolic modulators, stimulants and beta blockers categories.

A change was also made to the title of a class, with gene and cell doping a prohibited method on the 2019 list.

The change was made to the title to reflect that stem cells were already included in a category.

"Stem cells are not prohibited for treating injuries as long as their use restores normal function of the affected area and does not enhance function," WADA stated.

"The term 'post-transcriptional' was added to the list of examples to more completely define the processes that can be modified by gene editing."

Along with the minor alternations to the Prohibited List, the WADA Monitoring List for 2019 is unchanged from the 2018 version.

Tramadol is among the substances included on the Monitoring List, having been on the programme since 2012.

It has not been added to the banned list despite growing pressure, with the United States Anti-Doping Agency and UK Anti-Doping among those to support its addition.

The International Cycling Union (UCI) are hoping to introduce measures by the start of 2019 which would see cyclists prohibited from starting a race if they have used tramadol.

WADA research previously found that between 71 and 82 per cent of use of the painkiller, a synthetic chemical, between 2012 and 2015, came in the sport of cycling.

Earlier this year, WADA expressed that they were not yet convinced that tramadol has a performance-enhancing benefit but could ban it in the coming years if they conclude that it does.

The Prohibited List is one of six international standards that are mandatory for all signatories of the World Anti-Doping Code.

It designates what substances and methods are prohibited both in and out-of-competition, and which substances are banned in particular sports.

WADA stated the list is released three months ahead of it taking effect so that athletes and their entourage can acquaint themselves with any modifications.

For a substance or method to be added, it must be determined that it meets two of the three criteria.

This could be that it either has the potential to enhance or enhances sport performance, it represents an actual or potential health risk to the athletes, or it violates the spirit of sport.

WADA stated that athletes who have a legitimate medical reason for using a prohibited substance or method that is on the list, could be accommodated if they meet the criteria to receive a Therapeutic Use Exemption.

A summary of major modifications and explanatory notes can be accessed here.