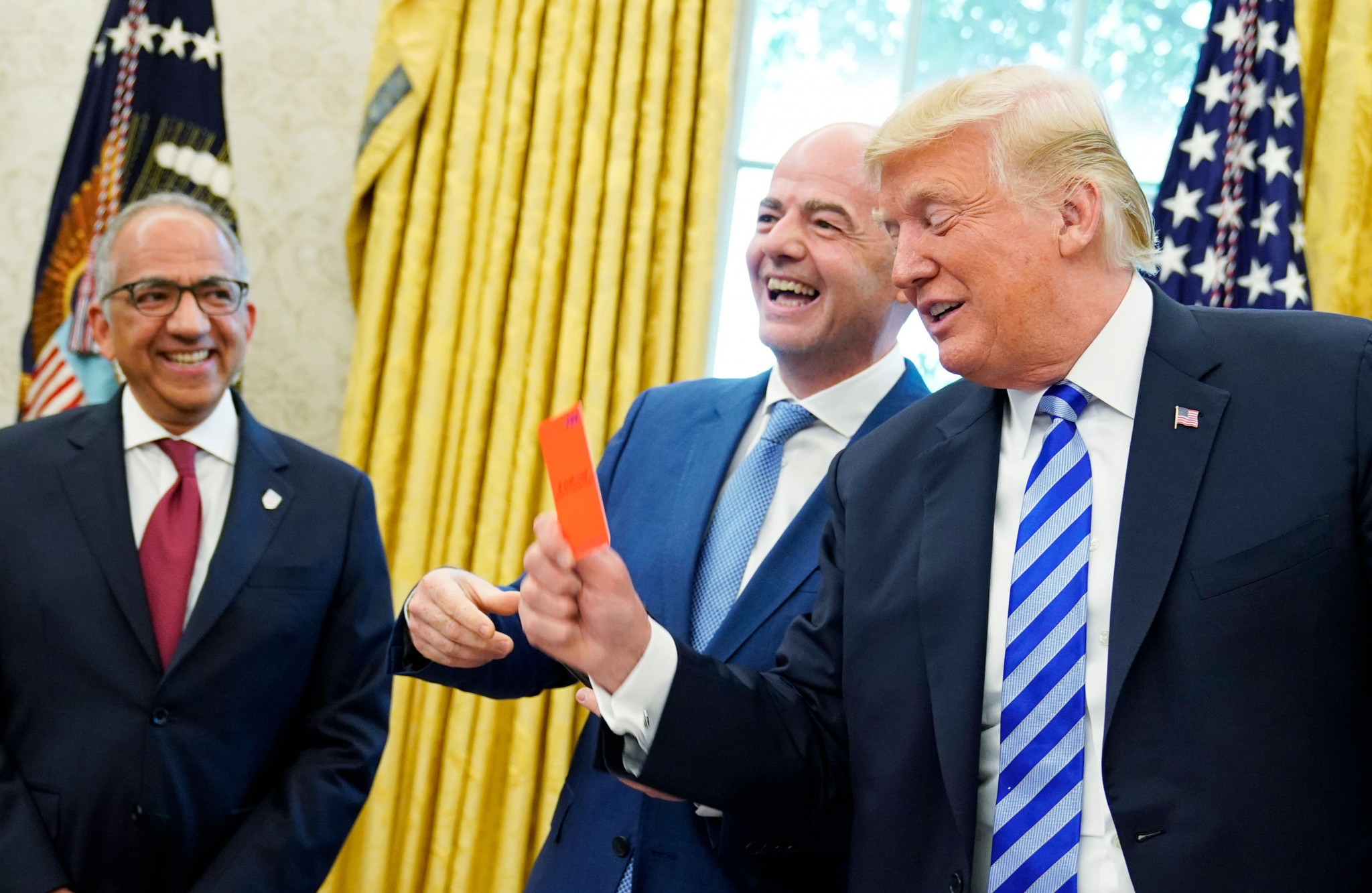 United States President Donald Trump discussed the 2026 World Cup with Gianni Infantino before waving a red card at the assembled media during a visit from the FIFA head to the White House.

Trump thanked Infantino and FIFA for awarding the 2026 tournament to the joint North American bid from the US, Canada and Mexico, describing the competition as a "very special event".

Infantino presented Trump with a referees' notebook, including a set of red and yellow cards, as well as a shirt with the US President's name and the number 26 on the back.

Trump then jokingly waved the red card at the press corps, who he has clashed with throughout his time as President.

Infantino was joined by US Soccer President Carlos Cordeiro, a member of the United 2026 bid team which beat Morocco in the race for the World Cup, at the Oval Office.

It marked the FIFA President's first official visit to the White House.

Infantino's disgraced predecessor Sepp Blatter, who resigned in 2015 amid the widespread corruption scandal, met former US President Barack Obama at the White House in July 2009.

"I very much appreciate the fact that we have won a very important event, the World Cup in 2026," said Trump, who backed the three-country bid for the tournament during the campaign.

"Soccer has come such a long way.

"I want to thank Gianni Infantino for being here - he's the President of FIFA and a highly-respected man."

Infantino said it was a "great honour" to meet Trump - who ignored a warning on political interference from FIFA in the lead-up to the vote on the 2026 World Cup hosts - following the visit.

Trump's impact on the 2026 race was a concern of the United bid but the US President sent three letters earlier this year reassuring FIFA that travel restrictions will not reply to anyone attending the showpiece event.

He reportedly told Infantino that "all eligible athletes, officials and fans from all countries around the world would be able to enter the United States without discrimination".

"We were obviously discussing the 2026 World Cup and President Trump was very happy that they will be hosting this big event," Infantino told US Soccer following the White House meeting.

"He assured us of all of his commitment and cooperation to make it successful and this for me was the most important message.

"Seeing and feeling how President Trump and the whole White House is into the organisation of this World Cup and this makes us feel very positive about the years until 2026."

A similar meeting between Trump and International Olympic Committee (IOC) President Thomas Bach last year was not publicised by either the White House or the IOC.