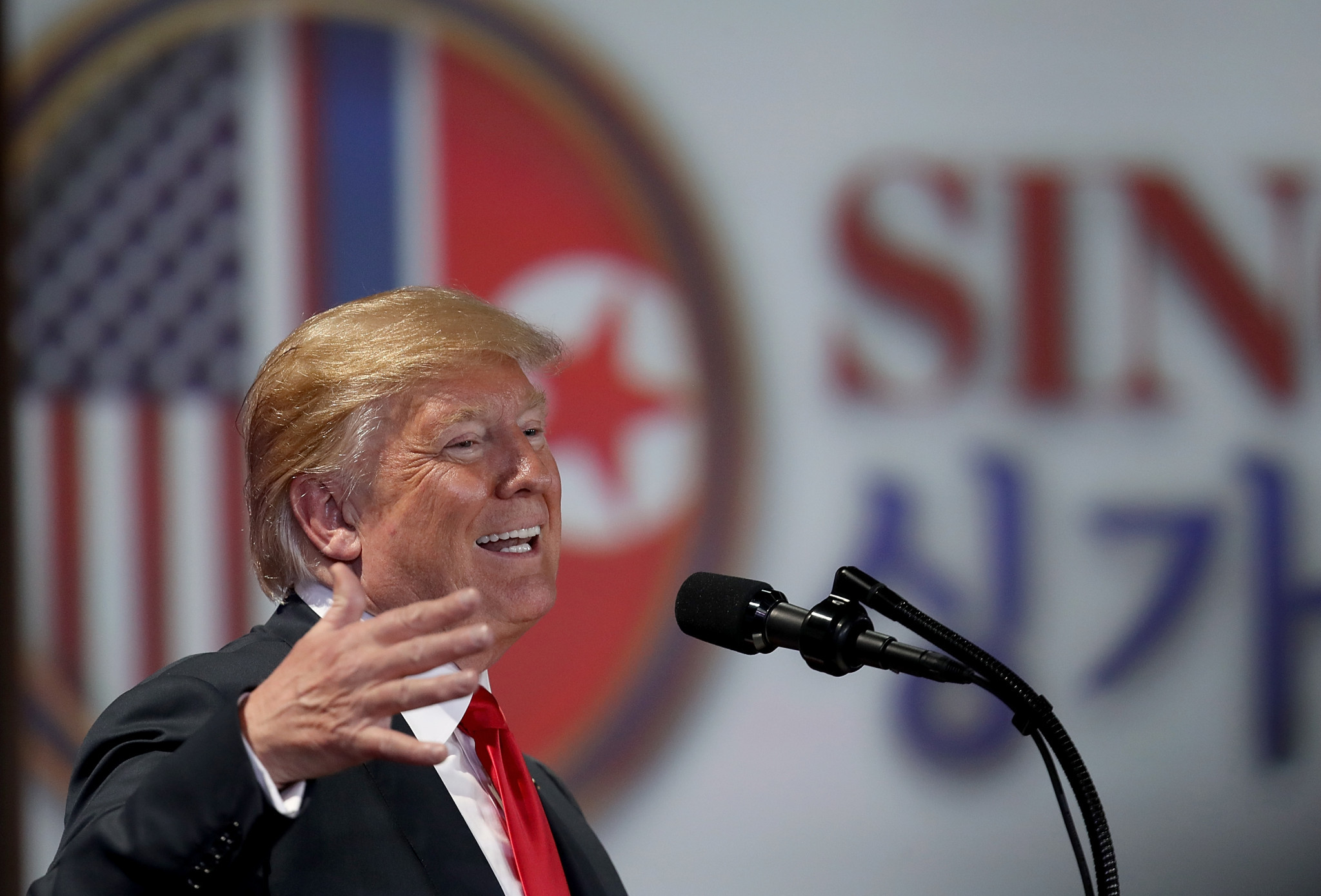 United States President Donald Trump has claimed that North Korea saved the Pyeongchang 2018 Winter Olympics from being a "massive failure".

He made the statement in a press conference following his historic summit today with North Korean leader Kim Jong-un in Singapore.

This was the first time leaders of the two countries have met with the talks following months of tense posturing and strained rhetoric.

Trump has previously played up the significance of North Korea's involvement in Pyeongchang.

"They [North Korea] have given up a tremendous amount," he said today, when asked if he now saw Kim as an "equal".

"You could add the Olympics to the question.

"They went to the Olympics, they took an Olympics that was going to be a massive failure, maybe wouldn't even have opened, and they made it a tremendous success by agreeing to participate.

"Add that to the list of things they've done."

South Korea hosted the Pyeongchang Winter Olympics between February 9 and 25.

The build-up was overshadowed by fears over the North's continued nuclear testing and missile launches, set to a backdrop of insults and threats exchanged between Trump and Kim.

The North Korean leader announced his country's intention to compete on New Year's Day, however, and four-party International Olympic Committee (IOC)-led talks then laid the path for their entry.

A total of 22 athletes from North Korea eventually competed, including a joint women's ice hockey team with the South.

Both Koreas also marched under a unified flag at the Opening Ceremony while further moves saw a squad of cheerleaders deployed and, arguably most significantly of all, a high-level North Korean delegation travelled which included Kim Yo-jong - the sister of the leader.

US vice president Mike Pence attended the Opening Ceremony and Trump's daughter Ivanka was present at the Closing Ceremony.

IOC President Thomas Bach has since met Kim himself in North Korea and has pledged to help the secretive state compete at both Tokyo 2020 and Beijing 2022.

An Olympic Day event, including both Koreas as well as the next Olympic hosts Japan and China, will be held in Lausanne this month and feature top table tennis players from the countries.

In January, Trump appeared to claim credit for North Korea's willingness to compete in Pyeongchang.

"I always believe in talking, right now they're talking Olympics," Trump said to reporters at Camp David in Maryland.

"If we are not involved they wouldn't be talking about Olympics right now.

"They would be doing no talking.

"He [Kim Jong Un] knows I'm not messing around.

"I'm not messing around, not even a little bit, not even one per cent.

Trump then added in March, during the Pyeongchang 2018 Paralympics, that the Olympics would have been a "failure" without him.

"I'll tell you, we did a great job on the Olympics," he said.

"President Moon of South Korea said without Donald Trump the Olympics would have been a total failure.

"It's a little hard to sell tickets when you think you're going to be nuked.

"But when North Korea called and said they wanted to be in the Olympics, everybody said let's get tickets and go."

Kim has pledged to denuclerisation with Trump agreeing to halt American military exercises in the South.

The meeting, which began with an historic handshake, is seen as a major turnaround with the relationship between the two previously seeming to be at rock bottom.