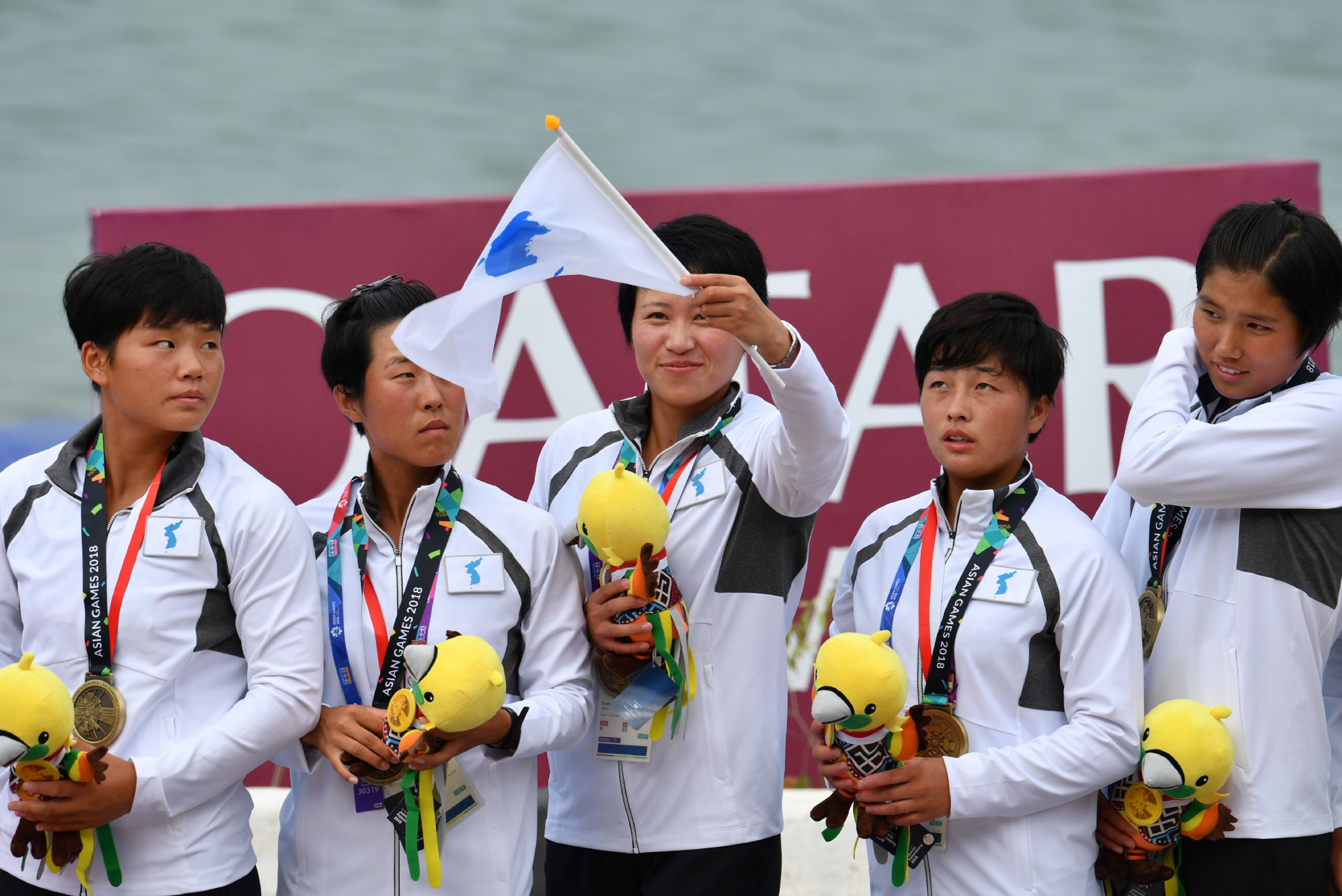 The unified Korean team secured their first podium finish at an international multi-sport event here today at the 2018 Asian Games after winning the bronze medal in the women’s 200 metres dragon boat race.

The 12-member crew clocked a time of 56.851sec at the Jakabaring Sport City Lake in Palembang, which is co-hosting the Games along with Indonesia’s capital Jakarta.

The Korea team in the final was made up of seven South Koreans and five North Koreans.

"In the first place, we weren’t sure if this unified team would be formed, but I’m so happy that we won the bronze medal in the end," Korea’s captain Kim was quoted as saying by Yonhap News Agency.

The Unified Korean team is also due to compete in the men’s and women’s 500m dragon boat racing events tomorrow.

The two Koreas marched together under the Unification Flag at the Opening Ceremony last Saturday (August 18) and they have also fielded joint teams in women’s 5x5 basketball and rowing.

A Unified Korean team also competed at the Pyeongchang 2018 Winter Olympic Games, which were held in February.

China’s gold medal was their fourth in traditional boat racing.

They are the only country to have won gold medals in women's events in this discipline and the trio of Song Yanbing, Liang Liping and Huang Yi have been members of the winning team each time.

It was Indonesia’s fourth successive silver medal in women’s traditional boat racing, all of which have come after finishing behind China.

Among today's other highlights was the men's 94 kilograms weightlifting event, which saw reigning Olympic and world champion Sohrab Moradi of Iran manage a world record-breaking snatch lift of 189kg on his way to winning the gold medal.

It bettered the previous record of 188kg, set by Greece's Akakios Kakiasvilis way back in November 1999.

Moradi finished with a total of 410kg after lifting 221kg in the clean and jerk.

He twice attempted 234kg in the clean and jerk in a bid to break his own world record of 233kg, but fell short on both occasions.

Had he been successful, he would have also broken his own total world record, which stands at 417kg, by 6kg.

Moradi's fellow Iranian Kianoush Rostami, his nearest challenger after the snatch, bombed out in the clean and jerk with no lifts at 218kg and then 220kg, twice.

Rounding out the podium was Thailand's Sarat Sumpradit with 380kg.

In the women's 69kg weightlifting event, North Korea's Rim Un Sim won the gold medal with a total of 246kg.

It is the first time since the introduction of the current weight classes in 1998 that a different country other than China has won this event.

China are not competing here in the sport after the Olympic Council of Asia vowed to adhere to the International Weightlifting Federation’s ban on the country.

They were one of nine nations suspended for a year last October for having three or more positives in the re-testing of samples from the Olympic Games at Beijing 2008 and London 2012.

Nagasako triumphed in 33.669 to become the first Japanese rider to win gold in the men's individual event at the Asian Games.

Zhang, meanwhile, prevailed in 39.643 to become the second Chinese rider to win gold in cycling BMX at the Asian Games, following in the footsteps of Ma Liyun who claimed the women's individual title at Guangzhou 2010.

The silver medal went to Thailand's Chutikan Kitwanitsathian in 40.379 and the top three was completed by Indonesia's Wiji Lestari in 40.788.

Karate medals were awarded for the first time at these Games today with Japan emerging victorious in both the men’s and women’s kata categories.

Laos' silver was their first medal of any colour at this edition of the Games.

In tennis, Uzbekistan’s Denis Istomin made a dash for the airport with an Asian Games gold medal in his back pocket after seeing off a spirited challenge by Chinese teenager Wu Yibing to win the men's singles final.

"I feel good to have the gold medal, but now I have to go to the airport quickly to catch the flight to be in the US Open on time and that’s why I can’t say a lot because I have to go," Istomin said as he raced to catch his flight for New York City.

At the end of day seven, China lead the medal standings with 72 golds, 51 silvers and 30 bronze.