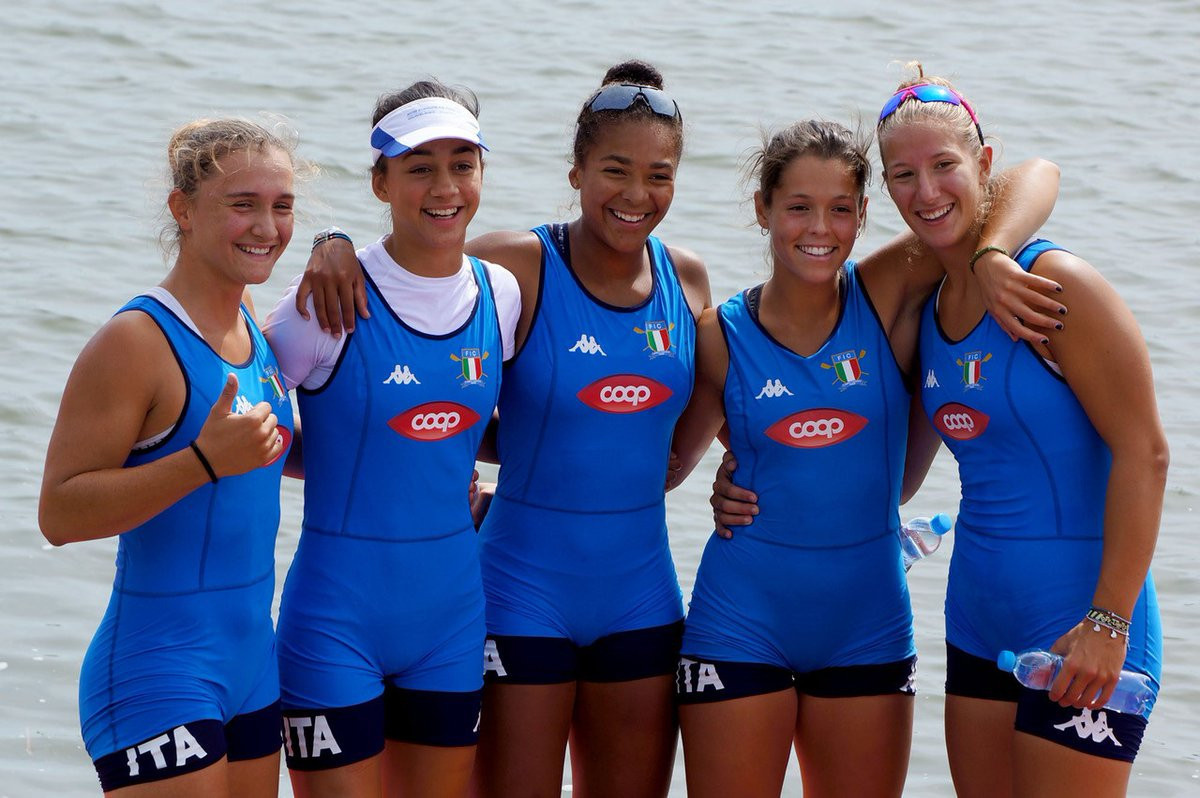 Italy won gold in the first edition of the junior women’s coxed four at the World Rowing Junior Championships today in Racice in the Czech Republic, on a mild and relatively still day on the water.

In all 14 A-finals took place today as well as a number of B-finals, on what was a packed day of action.

Italy had qualified fastest for the women’s coxed four final, but it was Ukraine that started the quickest in the final.

The hosts the Czech Republic were not far behind, but at the half way point they suddenly rowed out of their lane and stopped.

Italy, with their crew of Massaria, Baudino, Giuliani and Aguemang-Heard then took the lead and moved away to win in 7mins 14.190secs.

Australia, with their crew of Ella Mentzines, Laura Chancello, Lauren Graham and Isabelle Furrer, finished second in 7:16.920, while the United States finished third another second behind.

“We didn’t really have a good start but we managed to build a lot of speed through the middle. We kept accelerating and managed to overtake everyone.”

Italy were largely expected to take the men’s final as well, having entered the competition as the defending champions.

They promptly sealed the win once again, ahead of the United States and Australia, in 6:17.490.

One of their crew members Alessandro Calder called it a “wonderful” win.

“We knew we were going to suffer at the start but we built well during the middle today,” he said.

“I saw the others slowing and we managed to pass.”

Unlike on the women’s side, the men’s competition featured a B final as well, which was won by Canada in 6:25.390.

The Czech Republic take home their first 🥇of the 2018 #WRJChamps on home soil 🇨🇿 pic.twitter.com/quRahYnM9O

In the men’s pair final, Lithuania had qualified slowest but started very quickly with a stroke rate of 53.

Just like in their semi-final though they were unable to maintain it and the title was eventually taken by Romania in a photo finish with Germany.

The women’s pair meanwhile was won by Greece, who comfortably fought off a challenge from the United States to take that title.

The junior women’s four was taken by the United States though, who finished third in the class last year.

Just three second separated the top five boats, but though it was close, the US lead from early on and sealed the gold in 6:42.810.

The men’s four saw Great Britain take their first win of the day.

The crew of Michael Dalton, Douwe De Graaf, Calvin Tarczy and Theodore Darlow won by four seconds in 5:52.790, ahead of New Zealand’s crew, who crossed the line in 5:56.200.

The first sculls final of the day, the junior women’s quadruple sculls, was won by Switzerland, ahead of the German crew who set a new junior world’s best time earlier in the competition.

The Germans started fastest and had a half a boat length lead at one stage but seemed to run out of steam by the end, eventually finishing second by almost a second.

The hosts took their first gold of the day in the men’s quadruple sculls, which was expected after their crew of Valcav Baldrian, Tomas Sisma, Radim Hladik and Marek Rehorek set a new junior world best time earlier in the competition.

They won the final by a comfortable two second margin over Great Britain, finishing in 5:51.810.