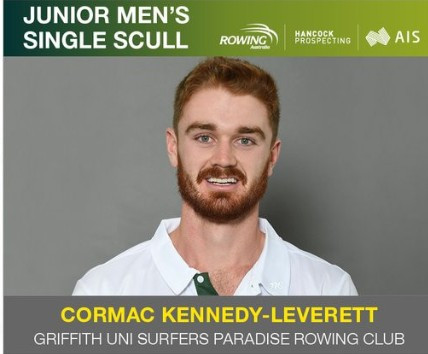 Australia’s Cormac Kennedy-Leverett has qualified fastest for the men’s single sculls final at the World Rowing Junior Championships in Račice in the Czech Republic today, with a junior world best time.

The Australian was in quarter-final number four and took it easily in 6min 51.450sec.

Dean also won his quarter-final today in 6:58.590 and both have been drawn in the same semi-final tomorrow.

American boats won races in all those classes.

The women’s four with coxswain won their repechage comfortably having initially finished third in their heat.

Caroline Ricksen, Heidi Jacobson, Kaitlin Knifton, Julia Abbruzzese and Noelle Amlicke took the lead ahead of Belarus at the half way stage and finished first in 7:02.23, meaning they are into the final on Sunday (August 12).

The men’s four, meanwhile, did the same to qualify for their semi-finals.

Grant Person, Alexander Degrado, Zachary Vachal and Kai Hoite were fourth at the start but eventually passed Serbia into first and finished in 6:05.25.

They are now scheduled to race teams from the home nation the Czech Republic, New Zealand, Romania, Croatia and Serbia, in their semi-final tomorrow.

Also into their respective semi-finals are the men’s quadruple sculls.

Nathan Phelps, Emory Sammons, James Wright and Kristopher Schumann took the lead in their repechage with around 750 metres to go and pulled away from the rest of the field to finish in 5:43.82.

Then in the men’s eight, the US team of coxswain Dylan White, Harrison Schofield, Eli Kalfaian, John Mark Ozaeta, Harrison Burke, Nicholas Fisher, Charles Fargo, Henry Lowe and Ryan Beeler, held off a challenge from Hungary to win their race and gain a place in the final.

America grabbed the lead off the start and built more than a two-second advantage at the 1,000m mark. Hungary made a push during the second half of the race, only for the US to respond  to earn the victory in a 5:39.01.

Hungary finished second to claim the other spot in the final.