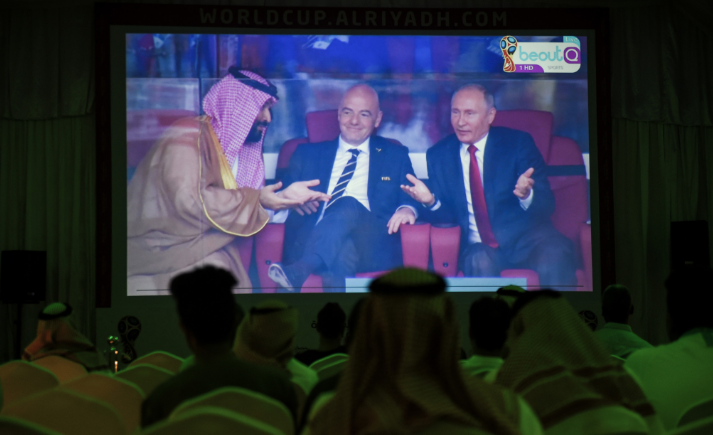 Saudi Arabia has denied claims by UEFA that a television channel illegally showing FIFA World Cup matches is based in the Kingdom.

The pirate station BeoutQ is widely available in Saudi Arabia and is believed to have been set up with support from the Kingdom's authorities.

Qatari-based beIN Sports Network, a sports-arm of Al Jazeera, is the only official rightsholder in the Middle East and North Africa region.

The channel is blocked in Saudi Arabia, however, over a wider political dispute between the country and Qatar.

UEFA said in a statement that they "will take the necessary steps to address the issue in order to enforce and protect the rights granted to beIN Sports, including through engaging with relevant satellite carriers in the region".

FIFA have also criticised the pirate broadcasting but, unlike UEFA, did not directly claim that BeoutQ was based in Saudi Arabia.

"Everyone knows that BeoutQ's set-top boxes are available in a number of countries, including Qatar and Eastern Europe," Saudi Arabia's Media Ministry claimed in response.

UEFA was quite surprised by a tweet of @Turki_alalshikh, as the UEFA President has never heard of this person and he therefore would have no reason to meet him.

Turki Al al-Sheikh, the head of Saudi Arabia's General Sports Authority, has also claimed on Twitter this week that UEFA's President Aleksander Čeferin was trying to meet him, but he does not "like to meet men of many faces".

UEFA replied by tweeting that they were surprised at the comment "as the UEFA President has never heard of this person and he therefore would have no reason to meet him".

In a series of 10 tweets, Al Alshikh described FIFA President Gianni Infantino as "a dear friend for whom the Kingdom [of Saudi Arabia] and I hold a great respect".

It comes as Saudi Arabia is also believed to be providing financial support for new club and national team competitions supported by FIFA, but opposed by UEFA.

Saudi Arabia and its allies United Arab Emirates, Bahrain and Egypt all imposed a boycott on Qatar in June 2017, severing diplomatic and transport ties in response to allegations, rejected in Doha, that the country is supporting terrorism.