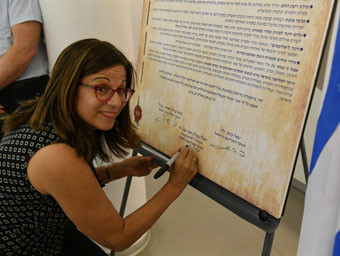 The Olympic Committee of Israel (OCI) has pledged to end gender discrimination by signing a Gender Equality Charter.

The Charter, a guiding document addressed to all sports stakeholders in Israel, was signed at the OCI's annual general assembly held in Tel Aviv.

It was signed by both the chief executive and President of the OCI, Gilad Lustig and Yigal Carmi, along with Suzy Yogev, chair of the Gender Equality Committee.

It means the OCI has pledged to create, maintain and ensure equal opportunities in sport, at all stages of training and participation.

It also means they will put in "every effort" to prevent any form of discrimination or inequality between men and women.

Marisol Casado, chair of the IOC's Gender Equality Review Project and also President of the International Triathlon Union, is quoted within the document as saying: "While recent years have seen improvements in gender equality in sport, we need more, and we need to do it quickly."

The charter also states: "Olympic sports and values belong to both women and men and professional-responsible sports practice is beneficial to both of them."

The OCI has now called on all national bodies responsible for promoting sport across the country to act responsibly and transparently.