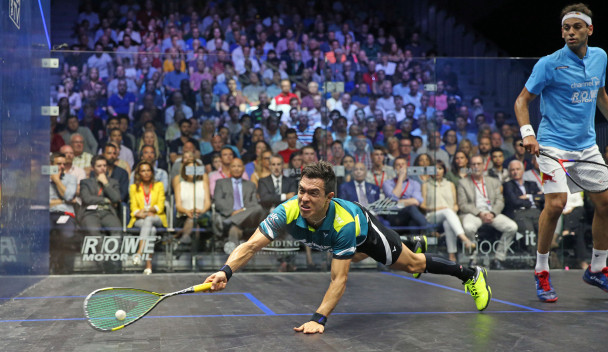 Unseeded Colombian Miguel Angel Rodriguez caused a major upset in the final of the Professional Squash Association British Open by beating world number one Mohamed Elshorbagy to the trophy at the Airco Arena in Hull.

Rodriguez made an excellent start to the match and won the first game 11-7 against the Egyptian world champion.

Elshorbagy, however, recovered brilliantly to win the next games 11-6, 11-6 to put him within one game of the title.

Thirty-two-year-old Rodriguez then performed an excellent comeback of his own, however, to claim the final two games 11-2 and 11-9 to give himself a 3-2 victory overall.

After his victory, the two-time Pan American Games gold medallist said: "I think everything was mental - I dreamed it.

"I had emotions during the week but I am just speechless.

"I'm so grateful for this opportunity to win this major tournament - the greatest of all time.

"I'm so proud of myself, this is for my parents, my family and Colombia.

"I was just giving it everything.

"Mohamed was fighting and fighting – he was on the floor and looked like he was struggling but then he came back and was hitting winners from the back of the court and I had a little bit of pressure and I didn't know what to do.

"I did the same as him and was fighting and fighting until the end.

"I was believing, and it happened."

What a performance from @noursherbini!!

The women's title was won in convincing fashion by world number one Nour El Sherbini of Egypt after she beat compatriot and number two seed Raneem El Welily, the world champion.

El Sherbini, who has been world number one for two years, put her opponent to the sword in the first two games with 11-6 and 11-9 victories.

El Welily then fought back in the third game and saved three championship points, but El Sherbini eventually won it 14-12 to ensure she got her hands on the trophy.

"The British Open is the biggest tournament on tour and it was an honour to win it once and now I have two and I'm really proud.

"We always have very tough battles, it's never an easy 3-0 and I'm really glad it's ended this way.

"The last tournament in Gouna she was 10-5 up and I came back but I didn't make it so this time I was glad that I came back and did it.

"I'm glad I came back and won the third.

"Every time we play, it gets harder.

"We're really good friends and I learn from her a lot and she is a role model to any player.

"I hope this battle continues and we keep playing each other in the finals."