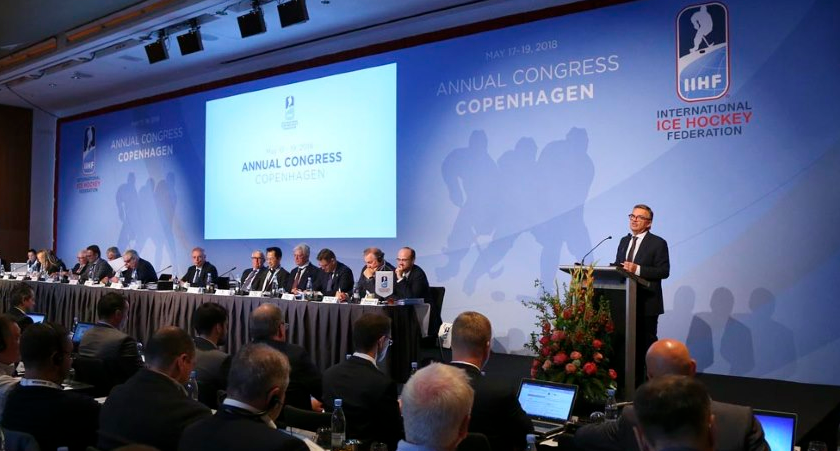 A 12-year term limit for all positions within the International Ice Hockey Federation (IIHF), including the President, is among rule changes approved at the governing body's Annual Congress in Copenhagen.

All Council members will be barred from serving longer than 12 years in a specific single position - be it President, vice-president or member.

This rule will not come into force until the 2020 elections, however.

IIHF President René Fasel has led the organisation since 1994 and is likely to have spent 26 years in the post by the time he reaches the age limit of 70 at the end of his sixth term in office in 2020.

The meeting in Copenhagen, which is taking place alongside the Men's World Championships in Denmark, also approved several other changes.

"A concept of separation of powers between the IIHF Council (political and strategical) and IIHF Office (operational) and the duties, roles and responsibilities of the President, Council and chief executive will be worked on," said an IIHF statement.

"A report will be presented to the 2018 Semi-Annual Congress in September and shall be voted on within the next 12 months.

Other changes involve a reduction from a super majority of 75 per cent to a qualified majority of two thirds of the vote for the adoption or modification of a statute and appointment of an honorary member.

Elections for Council Members, Auditors, Disciplinary Board Members and Appeal Board Chair require a simple majority of greater than 50 per cent.

No major World Championships were awarded during the meeting after two allocations last year.

But Kazakhstan capital Astana was named host of the second-tier Division I World Championships in 2019 after Slovenia withdrew its bid for Ljubljana.

Tallinn in Estonia will form the location the corresponding Group B tier.

Japan were also named host of the 2019 IIHF Ice Hockey U18 Women’s World Championship after the country earned promotion to the top tier last year.

Vancouver and Victoria in Canada will host the under-20 men's tournament beginning at the end of next year.

Ornskoldsvik and Umea in Sweden will host the U18 Men's World Championship in 2019.