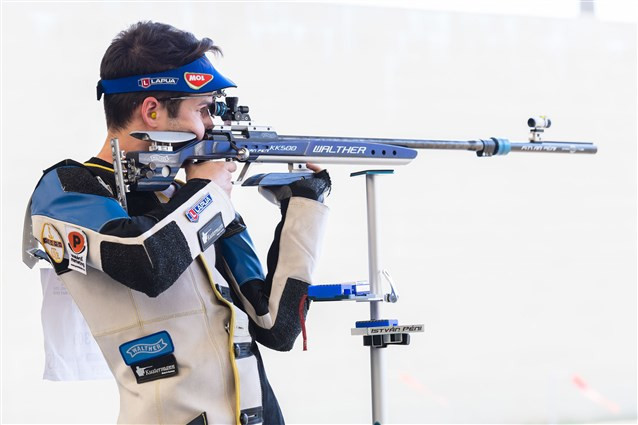 The 21-year-old concluded the match with 451.4 points at the United States army base on the Alabama-Georgia border.

It secured him a second World Cup gold medal in the event, adding to the two bronzes he won this year in Guadalajara in Mexico and Changwon in South Korea.

Péni suffered a serious malfunction in his rifle during the opening kneeling position, which he closed in last place 5.4 points away from the leader.

That gap had increased to 7.4 points following the prone position.

With his rifle still stuck in the kneeling settings, Péni shot with great consistency in the standing series, progressively erasing the deficit that separated him from top spot.

He rose up to second place with his 43rd shot and took what proved to be a decisive lead with his second-to-last one.

Denmark’s Steffen Olsen fired three times in the eighth ring during the elimination phase, finishing with 450.2 points and the silver medal.

Registering 8.9 points with his second-to-last shot, China’s Yang Haoran dropped from top position to third and had to settle for bronze with 441.0.

It is Yang’s second World Cup medal in the event with the other being the silver he won in Munich in Germany back in 2015.

The 45-year-old scored four hits in seven of the final's 10 series, battling with Serbia’s Zorana Arunovic throughout the match.

She finally built a consistent gap in the second-to-last round, when Arunovic only scored one hit and Grozdeva nailed a four-hit series.

With three hits between the two shooters and only one series to fire, Grozdeva’s three hits were enough to secure the gold medal and sign off with a total of 35.

Arunovic closed with 32 hits and the silver medal.

The bronze medal was awarded to the reigning Olympic champion Anna Korakaki of Greece.

She lost a thrilling shoot-off against Arunovic and finished in third place with 29 hits.

The third stage of the ISSF World Cup Stage is due to continue tomorrow with the men’s 10m air rifle final scheduled to be held.