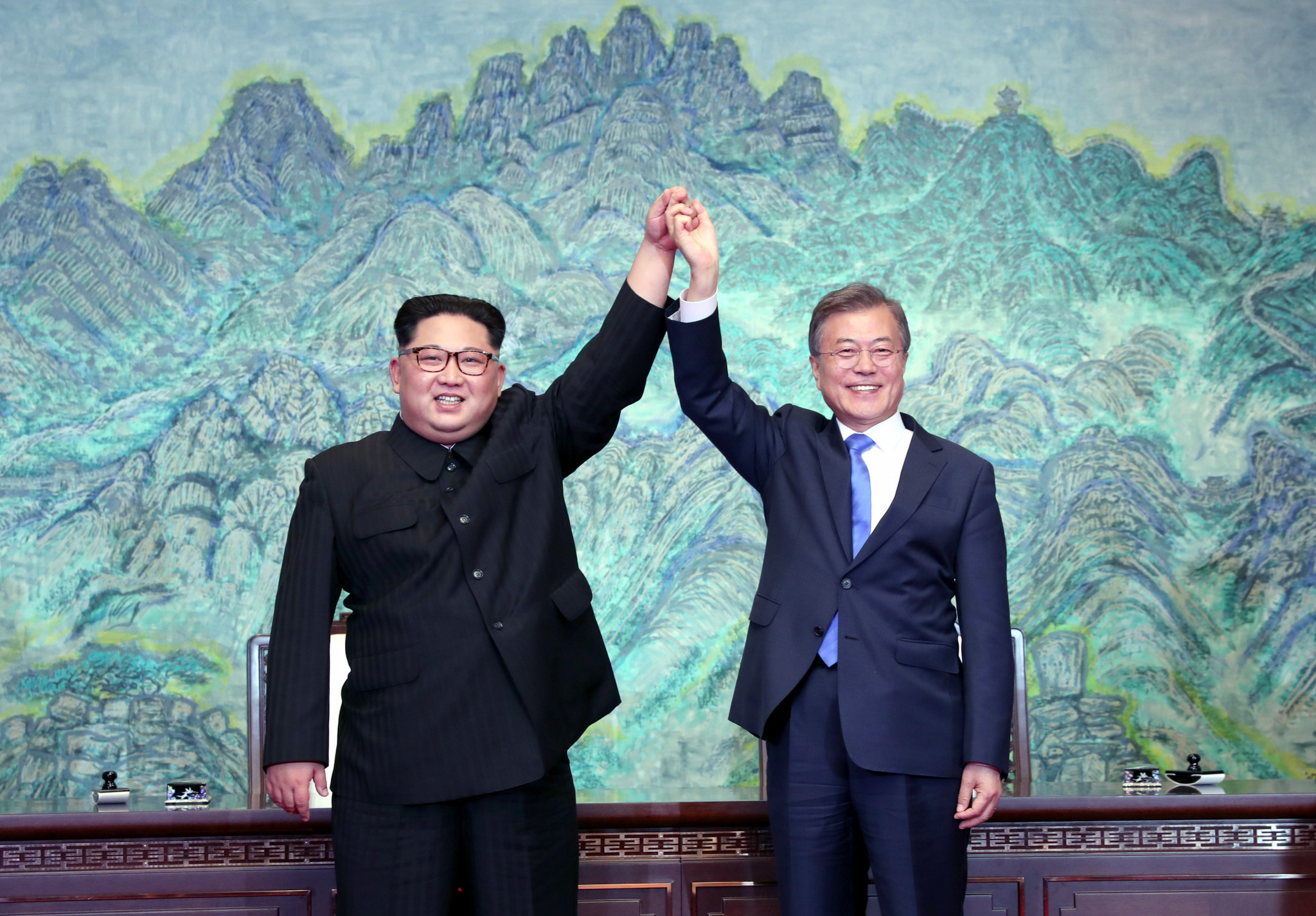 International Olympic Committee (IOC) President Thomas Bach has claimed that Pyeongchang 2018 "opened the door" for today’s historic summit between the leaders of North and South Korea, which has seen them reaffirm their commitment to "complete denuclearisation".

South Korean President Moon Jae-in and North Korea’s Supreme Leader Kim Jong-un have pledged to gradually reduce weapons on both sides, and to push towards turning the armistice that ended the Korean War in 1953 into a peace treaty this year.

The summit, held in the truce village of Panmunjom, was only the third such meeting between the leaders of the North and South.

"We solemnly declare to our 80 million people and the world that there will no more war on the Korean peninsula and a new era of peace has begun," the two leaders said in a joint statement afterwards.

"It is our urgent historic assignment to put an end to this current abnormal state of ceasefire and establish a peace regime."

North and South Korea marched together under the unification flag at the Opening Ceremony of Pyeongchang 2018 and, for the first time in Olympic history, competed together as part of a unified Korean women's ice hockey team.

Bach claimed during February’s IOC Session that Pyeongchang 2018 has "brought real hope" to everybody in the Korean Peninsula by encouraging better relations between North and South.

In November of last year, the United Nations backed an Olympic Truce resolution to be observed during the Games.

It came amid rising concerns following a series of missile tests by North Korea in the preceding months.

"During all of this time, the IOC kept the door open on the sporting side for the participation of North Korean athletes in Pyeongchang," Bach, who received a state medal from South Korea for his contribution to the Games, said in a comment piece published by Ekathimerini.

"We did so by extending deadlines, assuring them of special invitations, and continuing our support programme for the athletes.

"In this way, all the parties knew that they could count on the IOC to keep the door for participation in Pyeongchang open.

"The IOC was very happy to see both Korean Governments walk through this door, following the New Year’s address of the leader of North Korea.

"Right after this, the IOC initiated the 'Olympic Korean Peninsula Declaration' in a meeting on January 20, 2018, with both Governments and the two National Olympic Committees.

"With this declaration, the IOC made possible not only the participation of North Korean athletes in Pyeongchang, but also the joint march behind one flag at the Opening Ceremony, as well as the formation of a unified women’s ice hockey team.”

Also intended to happen is an arms reduction in the region, pending the easing of military tension, and a push for four-way talks involving the United States and China.

They have also agreed to organise a re-union of families left divided by the war, connect and modernise railways and roads across the border, and ensure further joint participation in sporting events, including this year's Asian Games in Indonesian cities Jakarta and Palembang.

Details of any concrete steps to dismantle Pyongyang’s nuclear programmes were not made clear, however.

Many analysts are therefore still sceptical about the North's apparent enthusiasm for engagement.

Last month, United States President Donald Trump claimed Moon had credited him for the success of the 2018 Winter Olympics, adding that the Games would have been a "total failure" without him.

Commenting on today’s historic meeting, Trump tweeted: "After a furious year of missile launches and Nuclear testing, a historic meeting between North and South Korea is now taking place.

"Good things are happening, but only time will tell!"

Shortly after, he tweeted: “KOREAN WAR TO END! The United States, and all of its GREAT people, should be very proud of what is now taking place in Korea!"

Kim reportedly committed to his country participating at Tokyo 2020 and Beijing 2022 during a meeting with Bach in Pyongyang last month.

Bach undertook a three-day visit to North Korea as he sought to capitalise in the cooling of regional tensions prompted in part by the country's participation at Pyeongchang 2018.

"In my meeting with the North Korean leader, he said 'the once frozen north-south relations greeted a dramatic thawing season with the Olympics as a momentum and it was totally attributable to the efforts of the IOC which offered an opportunity and paved a path for it'," Bach said.

"He also confirmed North Korea’s commitment to participating in the next editions of the Olympic Games.

"For his part, the South Korean leader always supported the participation of North Korea in Pyeongchang because he saw the Olympic Winter Games as a chance to pause the spiral of confrontation and shift the momentum towards peace.

"The Olympic Games have opened the door.

"The politicians have taken the first steps to walk through this door."