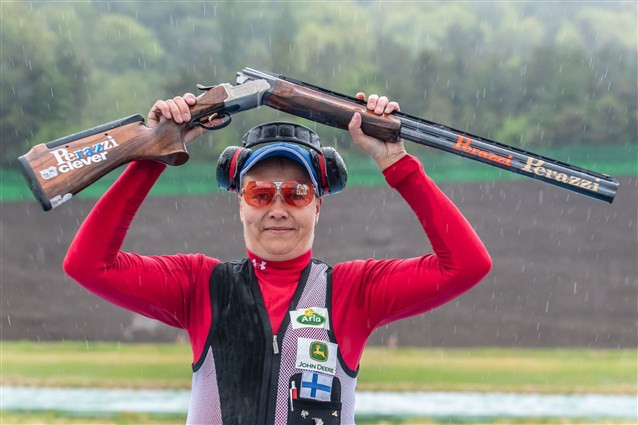 Weather conditions were a major factor on the second day of the International Shooting Sport Federation (ISSF) World Cup in Changwon in South Korea.

As temperatures dropped, the rain started falling and wind blowing, making it difficult conditions for competitors in the women's trap.

Yet, at the end of the qualifications, San Marino’s Alessandra Perilli finished top of the scoreboard with a qualification world record of 122 hits out of 125 targets.

"I love to shoot in the rain," she said.

"I know it sounds strange, but I give my best when the weather is at its worst."

The tables were turned in the final, though, at a shooting range due to host the 52nd ISSF World Championship in September.

Perilli started-off by missing three targets out of her first five, while Spain’s Fatima Galvez and Finland’s Satu Makela-Nummela overtook her.

After the first 25 targets, it was Russia's Tatiana Barsuk who was eliminated, taking the sixth place with 16 hits.

She was followed by Australia’s Penny Smith, winner of last year’s ISSF World Cup in New Delhi, who closed the match in fifth with 20 hits out of 30 targets.

Perilli did well to recover and fought hard against China’s Wang Xiaojing right to the 35th target, when she eventually left her opponents in fourth with 23 hits as she took bronze medal with 27 hits out of 40 targets.

The duel for the gold medal between Galvez and Makela-Nummela was decided by the last two series.

The 31-year old Galvez missed three targets out of 10, eventually placing herself in second place with 37 total hits.

Makela-Nummela, the Olympic gold medallist at Beijing 2008, zeroed in on the victory and hit nine out of her last 10 targets, finishing top with a total score of 41 hits.

It was Makela-Nummela's first ISSF World Cup victory since 2016.

The day had opened in better conditions an exciting final in the women's 25 metre pistol event as Australia’s Elena Galiabovitch took her first World Cup medal after a spectacular duel with China’s Lin Yuemei.

Galiabovitch, the Commonwealth Games silver medallist, triumphed in a shoot-off after both her and Lin had finished with 34 hits.

Both scored two hits in their first additional round before Galiabovitch clinched victory with three hits against two.

In the other event held today, China won the 10 metre air rifle mixed team, a new event due to make its debut on the Olympic programme at Tokyo 2020.