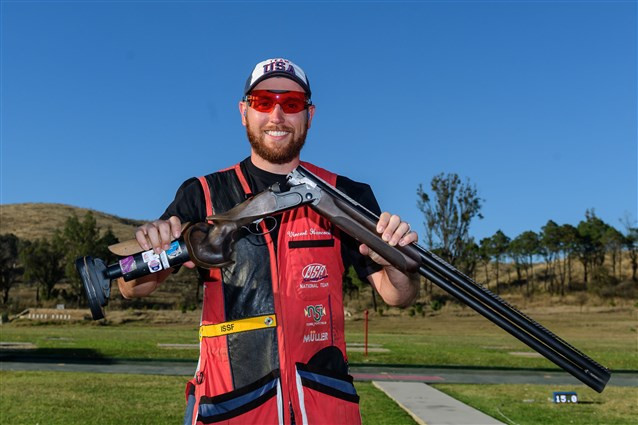 It took six additional hits for Hancock to secure victory, climbing atop the World Cup podium for the seventh time in his career.

The 28-year-old entered the final with the highest qualification score and went onto equal the world record with 59 hits out of 60 clays.

Adams, however, also equalled the world record, set by Italy’s Riccardo Filippelli and Great Britain’s Ben Llewellin in India's capital New Delhi last October, to take it to a shoot-off.

The silver medal marked his best result of the career in an ISSF competition by the 25-year-old Adams.

Italy’s Tammaro Cassandro was tied with Hancock and Adams at the 50th shot mark but had to leave the match because of his lower bib number and finished third.

With 49 hits out of 50 targets, he secured his fourth World Cup medal.

Ukraine’s Mikola Milchev, the Sydney 2000 Olympic champion in the event, took fourth place with 37 hits out of 40.

He was followed by the United States' second finalist, Frank Thompson, who placed fifth with 26 hits out of 30.

Two-time Olympian Jorge Atalah of Chile completed the top six with 15 crushed clays out of 20.

India claimed top spot in the final standings with a total of nine medals - four golds, one silver and four bronzes.

They were followed by the US, who secured three golds, one silver and two bronzes.

All the American's medals came in shotgun events.

China and France each claimed five medals with the former’s haul made up of two golds, two silvers and one bronze, and the latter’s of one gold, one silver and three bronzes.

Changwon in South Korea is due to host the next leg of the 2018 ISSF World Cup Series from April 20 to 30.