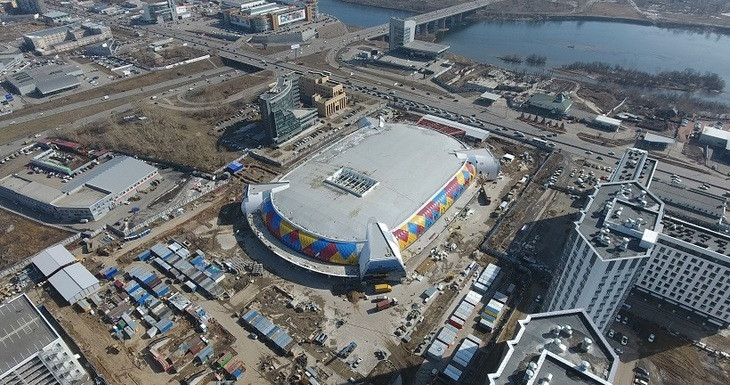 Krasnoyarsk's acting governor Alexnader Uss has said that venues for the 2019 Winter Universiade in the Russian city are 50 to 70 per cent ready.

"[In terms of sporting venues], their readiness is rather high, no less than 50 to 70 per cent," he said.

"As for the urban infrastructure, the active phase of its preparation will start in the spring.

"We applied for support to the President, and he took the decision to allocate additional financing for these works."

Uss also said that roads and building facades in Krasnoyarsk, in-and-around the venues, will be repaired this summer.

He stressed, however, that there is no set level of readiness for the Games.

"It is impossible to assess the level of readiness of the city as there is no precise benchmark that we can reach and say that we have done everything perfectly," he said.

"We can rather talk about the degree of fulfillment of our plans.

"I hope that we will be able to have them fulfilled by the end of August, and Krasnoyarsk will be presentable for guests.

"We envisage the Winter Universiade Krasnoyarsk 2019 as a stimulus to make changes in the city and in the quality of life here.

"From this point of view, the Games mean the start for us rather than the finish."

Krasnoyarsk 2019 have also announced that they are in discussions on how best to secure the Universiade's legacy and ensure that sporting venues do not become white elephants.

To this end, Russian President Vladimir Putin has set up a working group, which will study the most economically viable options for the venues.

Acting Sports Minister for Krasnoyarsk Sergey Alexeev outlined the legacy plans for some of the venues.

"To date, the Ministry of Sport of the Russian Federation have discussed various options for creating federal structures based on the Sopka and Raduga clusters including the federal school of the Olympic reserve or the federal training centre," he said.

"Both clusters include 10 sports facilities that will provide excellent conditions for training athletes at the highest level in six sports - snowboarding, Alpine skiing, freestyle skiing, skiing, biathlon and orienteering."