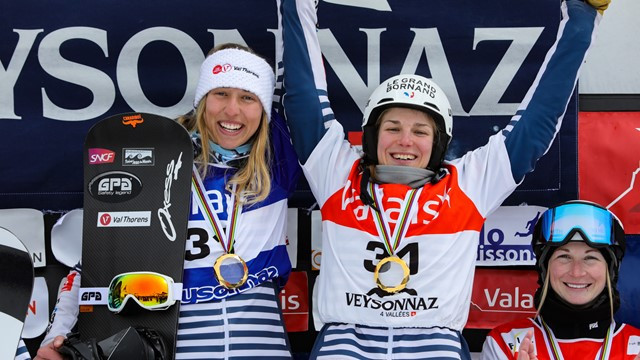 And fourth place in the men’s event in the Swiss resort was enough to secure crystal globes as overall champions for Emanuel Perathoner and Omar Visintin of Italy.

Moenne Loccoz and Trespeuch rounded out their season by finishing ahead of Sofia Belingheri and Raffaella Brutto from Italy, as well as Canada's Zoe Bergermann and Tess Critchlow.

The 2017 world champions only kept a clean sheet, though, due to the mistake of their Italian rivals.

In the final left turn, Brutto had been able to break away after an intense battle with Trespeuch and looked ready to win.

But with the finish within sight, the 30-year-old got thrown from the roller section, almost going off the home stretch.

While Brutto managed to avoid a fall, she lost pace and ran into the finish post, opening the door for Trespeuch to pass her on the final metres to claim another win.

Moenne Loccoz and Trespeuch finished with a maximum 4,000 points in the overall standings, with compatriots Julia Pereira de Sousa Mabileau, fourth on the day, second on 1,900.

Perathoner and Visintin were also aiming to finish off the season with a win but their hopes of a podium result went awry early in the men's final when Perathoner, the first to enter the course for his team, flew off in the first right turn at approximately 80 kilometres per hour.

With the top duo of the season being out of the game, a thrilling battle of three emerged when the second riders of each team arrived on a course built on the piste L'Ours.

Germany's Konstantin Schad secured victory on the day for himself and his team-mate Paul Berg as he found room to pass his rivals Lucas Eguibar of Spain and Alessandro Haemmerle of Austria.

It was only the second win for Schad and Berg on the FIS Snowboard Cross World Cup tour since Montafon in 2013.

Their win elevated them to third in the overall standings, with 1,820 points, just behind Lucas Eguibar and Regino Hernandez of Spain, who had 2,700.

Eguibar and Hernandez finished second on the day ahead of the Austrian pairing Hanno Douschan and Alessandro Haemmerle.