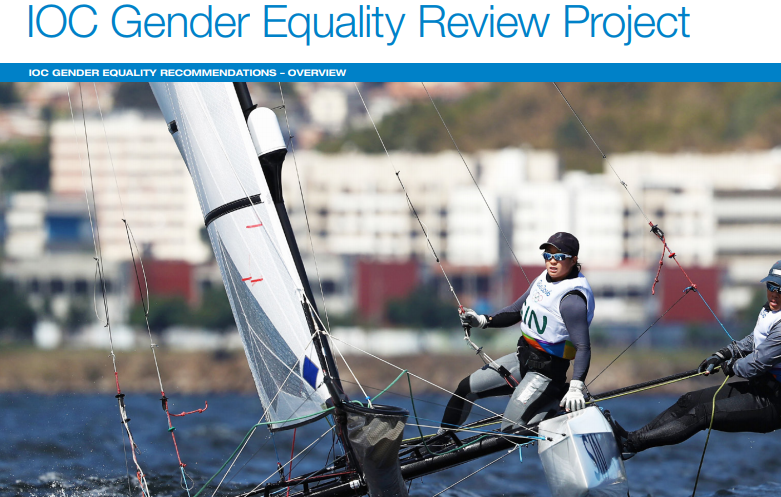 Twenty-five recommendations for boosting gender equality in sport have been unveiled by the International Olympic Committee (IOC) today.

The proposals, published to coincide with International Women's Day, concern the governance of sport as well as both elite and lower level participation.

The IOC pledge to ensure "full gender equality in athlete quotas and medal events for both genders from the Olympic Games 2024 and the Olympic Winter Games 2026 onwards".

They also "strongly recommend" that organisations such as National Olympic Committees (NOCs) and International Federations (IFs) provide funding to "promote gender equality and reflect diversity in gender within their management and membership".

"Without diversity in leadership, there cannot be diversity and support in policy," the IOC claim.

The IOC had hoped to ensure 50-50 gender equality by Tokyo 2020 but have fallen marginally short of this aim, reaching 48.8 per cent instead.

This is principally due to resistance from some IFs to eradicate men-only disciplines, such as 50 kilometres race-walking in athletics, or to have the same numbers in events where female participation is far lower, such as boxing and cycling road races.

Today's report calls for equal numbers of teams or entrants in all Olympic events.

It also calls for "competition formats related to distances, duration of competition segments, number of rounds, etc between women and men are as equal as possible".

There are still some differences here, as it stands, with the men's tennis singles final lasting five sets in comparison to the three-set women's one.

Men also compete over longer distances than women in sports such as cross-country skiing.

Another recommendation stipulates that: "As much as possible, the sport-specific equipment and apparatus for men and women should be the same."

Men currently use heavier equipment in many athletics throwing events and compete in the 10-event decathlon rather than the seven-event heptathlon.

Other elements concern equal promotion for men's and women's sport as well as "establishing mechanisms to address inequalities between genders in prize money or other athlete payments".

Sports such as football, golf, cycling and ski jumping are among those where events have still received criticism for unequal prize money.

The IOC promise to "establish strategic mechanisms to increase the pipeline of female candidates for governance roles in general as well as for Executive Board positions".

They also call on IFs and NOCs to "review their electoral processes with a view to developing strategies for gender-balanced representation in their governance bodies".

The IOC will co-host a panel discussion with United Nations Women, Procter & Gamble, NBC and UNESCO (United Nations Educational, Scientific and Cultural Organization) on the margins of the 62nd Session of the Commission on the Status of Women in New York on Wednesday (March 14).

The event will focus on the portrayal of female athletes in the media and its implications for participation.

A third edition of the IF Gender Equality in Leadership Forum will be held on March 28.

This event, co-organised by the IOC and the Association of Summer Olympic International Federations, aims to provide IF leaders with a platform to discuss the review findings, share best practices and seek new solutions to bridge the gap.

A more detailed Gender Equality Review report is due to be published after the forum.

"We are certain that, through the implementation of the 25 IOC Gender Equality Recommendations, we as the Olympic Movement - athletes, officials, commissions, federations and executives - can take real steps to enact effective change together," said IOC President Thomas Bach today.

"It is not just the right thing to do.

"It is in the interest of us all - the fans, the families, and every girl and woman who has been able to fully realise her dreams through athletic participation.

"As the leader of the Olympic Movement, the IOC has an important responsibility to take action when it comes to gender equality - a basic human right of profound importance and a fundamental principle of the Olympic Charter."

The International Association of Athletics Federations are among other governing bodies to have hailed International Women's Day today.

"We have parity in pay, parity in play but not parity in positions," said IAAF President Sebastian Coe.

"Being able to reflect off the field of play what is widely heralded as one of the most diverse and culturally attuned sports on the field of play is critical to remaining relevant to all fans but affirmative action is the only way we will shift the dial."

The full IOC report can be read here.