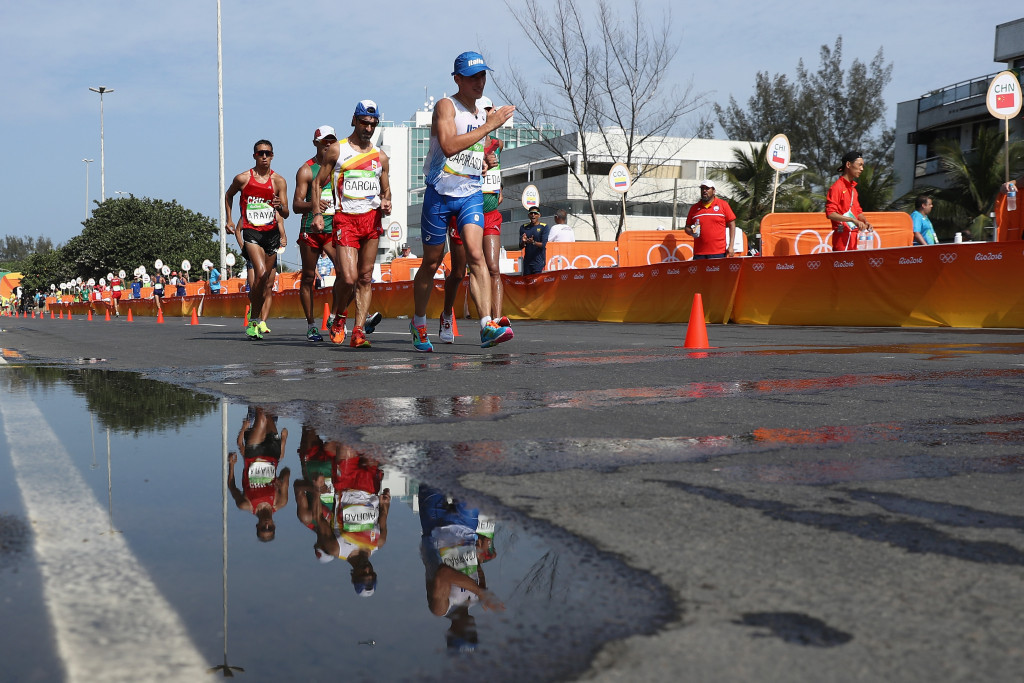 At least 60 leading racewalkers are planning to send a petition to the International Association of Athletics Federations (IAAF) President Sebastian Coe opposing the potential decision to drop the men's 50 kilometres event from the Olympic and World Championship programme.

Dscussions on potential changes to event formats for both events due to take place at the IAAF Council meeting in London on April 12 and 13.

The International Olympic Committee (IOC) are believed to be behind the proposal as part of their drive to improve gender equality on the programme.

At present, men compete in 20km and 50km walking events, while women race only over 20km.

One idea proposed has been for a half marathon - 21.1km - event be introduced rather than either of the current distances.

The letter, due to be sent to Coe today, is co-signed by Australia's Jared Tallent and Slovakia's Matej Tóth, the respective 50km Olympic champions at London 2012 and Rio 2016.

"It has recently come to light that the IOC has proposed changes to the international schedule of events to the walks as of 2018," the petition says.

"The abolishment of the men’s 50km Walk at Olympic Games and IAAF World Championships and the men’s and women’s 20km walk moving to a half-marathon distance (21.1km).

"It is our understanding that the IAAF Council are to vote on these changes at the upcoming Council Meeting in London."

The petition adds: "Olympians, athletes and supporters of the Games firmly believe that the IOC should embrace rather than exclude events such as the 50km walk...

"...To further develop gender equality and create a fair and ethical sports field, we propose that the current schedule of three events, men’s 50km walk, men’s 20km walk and women’s 20km walk, is maintained until the Tokyo Olympic Games 2020.

"With athlete representation, it is our desire to create a working group to assess the future of the event beyond 2020.

"These measures ensure sufficient athlete consultation, maintenance of athlete’s livelihoods and rewards the investment of National Federations in support of their athletes to 2020.

"This proposal provides the IAAF opportunity to commit to transparency in decision making and listen to the athletes they represent.

"We call on Thomas Bach and the IOC Executive [Board], Sebastian Coe and the IAAF Council, to be transparent in this decision making process and include the athletes in any further discussions in regards to walking at the Olympics Games and IAAF World Championships."

Many prominent walkers have criticised the possible decision on social media.

Canada's Pan American Games 20km champion Evan Dunfee tweeted: "It's pouring rain. I have 30km to do - but I can't see the point if the IAAF is ripping my event from me completely behind my back."

It's pouring rain. I have 30km to do. But I can't see the point if the @iaaforg is ripping my event from me completely behind my back.

IOC sports director Kit McConnell would not comment on the specific nature of the discussions when contacted here today where he is attending the SportAccord Convention.

He did confirm, however, that while each Summer International Federation had a February deadline for submitting event proposals for Tokyo 2020, they have been afforded some flexibility to take into account meeting such as the IAAF Council one.

"From a general point of view on each sport, we are looking for gender balance," he told insidethegames.

"As you know, in some sports that doesn't mean a completely mirrored programme of events, because in some sports you can reach equal numbers without having exactly the same events for men and women.

"It's a conversation we are having with every Federation.

"About what gender equality means in their sport, both on the athlete side and on the event side."

The 50km event was first included on the Olympic programme at Los Angeles 1932 and has featured at every edition sinc, except Montreal 1976.

Tallent was upgraded to the gold medal at London 2012 after initial winner Sergey Kirdyapkin was disqualified.

insidethegames understands that there are likely to be at least three members of the IAAF Council likely to oppose any reduction to the racewalking programme.

"The 50km walk embodies many of the Olympic values, most notably how to endure. It is one of the few remaining free events on the Olympic programme, allowing all to witness and engage with athletes in their pursuit of excellence," the petition adds.

"It was one of only two events at the Rio Olympic Games where the first four finishers represented different Area Federations.

"The walks have been a staple of the Olympic athletics programme since 1932.

"While appreciating it’s history, we acknowledge that sport must constantly evolve to remain relevant and appealing.

"Having two men’s and only one women’s walks at major championships is based on an outdated and heinously wrong assumption.

"We commend the IAAF on taking measures to ensure the inequality based on gender is closing and celebrate the first official women’s 50km walk world record.

"We want to work with governing bodies at the highest level."

A petition has also now been set-up via change.org.

The campaign, entitled Keep the 50km Race Walk in the Olympics, can be accessed here.