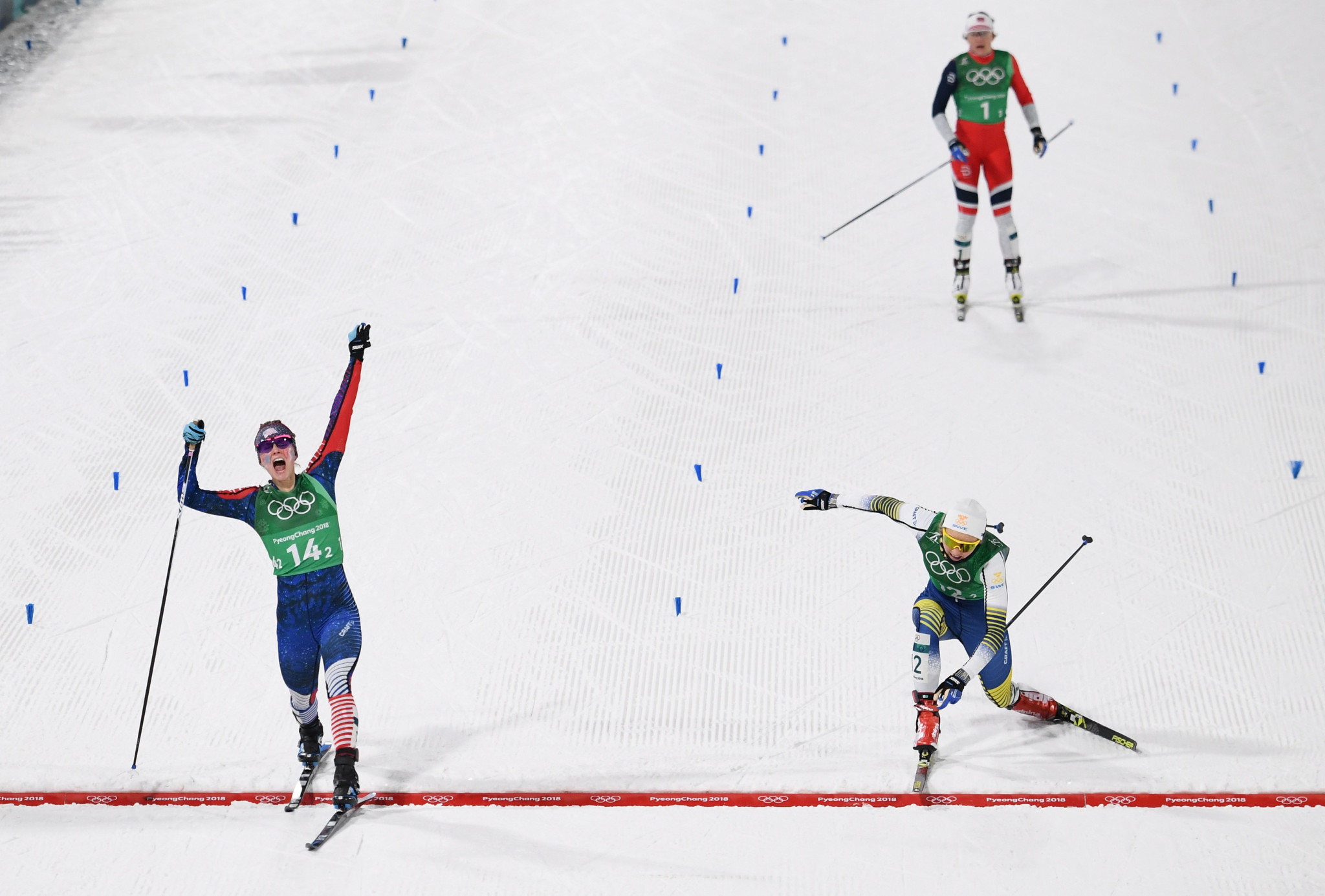 The duo combined to complete the 1,176 metres long track in a time of 15min 56.47sec at the Alpensia Cross-Country Centre.

Norway’s Marit Bjørgen and Maiken Caspersen Falla were 2.97 seconds off the pace in third.

It meant Bjørgen became the most decorated Winter Olympian of all time with her 14th medal.

Diggins sealed America's victory after holding off the challenge of Nilsson, the individual sprint gold medallist, in a frantic race for the line.

"In the final stretch I was just thinking, 'go, go, go - I'm giving it everything I had and I've got someone who I really love and care about waiting for me at the finishing line and I just want to make her proud'," Diggins said.

"Just believing that we had what it took the entire day."

Randall, 35,competing at her fifth Olympics, added: "Hearing it out loud, it still doesn't feel real.

"It's what I've been working on for 20 years and with this team for the last five years.

"Wow, it's just so fun to put it together tonight, finally."

Diggins and Randall won the gold medal in this event at the 2013 World Championships, becoming the first Americans to do so.

The only other Olympic cross-country medal won by the US came at the Innsbruck 1976 Games, where Bill Koch claimed silver in the men’s 30 kilometres event.

"It's hard to understand, actually," Bjørgen, a medallist in all four events she has contested at Pyeongchang 2018, said.

"When you're still an athlete you just have focus on other races.

"I think I'll need to have time to myself and look behind me and look how I've been able to do this.

"It's still hard to understand it when I'm standing here."

Falla claimed it was her childhood dream to race in the same team as Bjørgen.

"I watched her on TV as a young girl and I wanted to ski as fast as her," she added.

"Now I finally got to ski on the same team as her in the Olympics as she is becoming the most-successful Winter Olympian.

"It's very big for me to be in the same team as this fabulous woman."

In the equivalent men’s event, Norway’s Martin Johnsrud Sundby and Johannes Høsflot Klæbo came out on top in 15:56.26.

Rounding out the podium were France’s Maurice Manificat and Richard Jouve in 15:58.28.

Norway's victory secured a third gold medal of Pyeongchang 2018 for Klaebo, who also tasted victory in the sprint classic and 4x10km relay.

"It is an incredible feeling to finish first here," Klæbo said.

"Both of us have been very nervous today and I did not sleep good today also."

Sundby, part of Norway's 4x10km relay team and was the silver medallist in the 15km + 15km skiathlon here, claimed his team-mate inspired him.

"He has come in last season and in this season, he is maybe showing us how modern cross-country skiing should be," he added.

"He is a talent everybody looks up to at moment, but he is only 21-years-old, so I hope I have one piece of advice or two to give him in the next few years.

"But for sure he has taken cross-country skiing to another level."

Cross-country skiing medal action at Pyeongchang 2018 is due to resume on Saturday (February 24), when the men's 50km mass start classic event is scheduled.