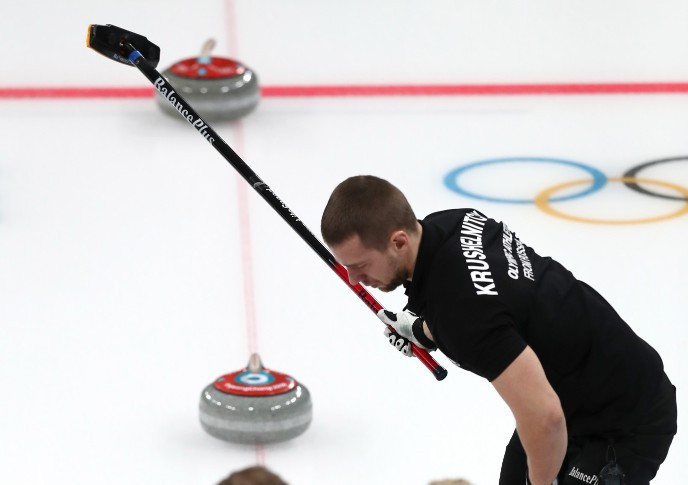 Aleksandr Krushelnitckii, a member of the Olympic Athletes from Russia (OAR) mixed doubles curling team who won a bronze medal at Pyeongchang 2018, has failed a drugs test for meldonium.

A test submitted by Krushelnitckii showed traces of the substance, used to treat heart attack victims and which has been on the World Anti-Doping Agency (WADA) banned list since January 2016.

Krushelnitckii has now left the Athletes Village and has handed back his accreditation.

OAR spokesperson Konstantin Vybornov confirmed they have been officially notified of the positive test by the International Olympic Committee (IOC).

The result has not yet been officially confirmed and a B-sample will be opened tomorrow.

The Court of Arbitration for Sport (CAS) Anti-Doping division, responsible for administering anti-doping sanctions at the Olympic Games, however, have not yet been notified of the case and will not be until it is confirmed as an anti-doping rule violation.

It is believed the analysis showed the meldonium had been taken up to 10 days before the test, although Krushelnitckii denies taking the substance.

Krushelnitckii and Anastasia Bryzgalova, his curling partner and wife, had been training for Pyeongchang 2018 in Japan.

He had passed an out-of-competition drugs test on January 22, insidethegames understands.

It is understood by insidethegames Krushelnitckii has told Russian officials that he fears someone at the training camp in Japan spiked his drink with meldonium before he travelled to South Korea.

His claim is being investigated.

If a positive drugs test confirmed, however, the OAR team could be stripped of the bronze medal Krushelnitckii and Bryzgalovoy won when they beat Norway 8-4 in the playoff match.

It could also throw into jeopardy the chance of Russian athletes being able to march under their own flag at the Closing Ceremony on Sunday (February 25).

Russian athletes are competing in the neutral OAR team here as part of their punishment for a "systemic manipulation" of the anti-doping system when hosting the last Winter Olympic Games in Sochi.

This suspension may be lifted before the Closing Ceremony if the team are ruled by  a special IOC panel to have acted within the "letter and spirit" of their eligibility conditions.

"Doping testing and sanctioning at the Olympic Winter Games Pyeongchang 2018 is independent from the IOC," said a statement today by the IOC.

"Therefore, the IOC cannot communicate on individual cases while the procedure is still ongoing."

The statement outlined their processes for confirming Russian eligibility, before concluding: "On the one hand it is extremely disappointing when prohibited substances might have been used, but on the other hand it shows the effectiveness of the anti-doping system at the Games which protects the rights of all the clean athletes."

Dozens of mainly Russian and Eastern European athletes failed tests for meldonium in the immediate months after it was first banned more than two years ago,

Russian curler Ekaterina Galkina, a lead for the home team that finished sixth at Sochi 2014, is also under investigation for submitting "disappearing positive" samples shortly before those Olympics.

Galkina's name is hidden in the annex of the Evidence Disclosure Package (EDP) released alongside the WADA-commissioned McLaren Report in December 2016, as an athlete in the "Save" programme whose positive samples were illegally labelled as clean in the WADA Anti-Doping Administration and Management (ADAMS) System.

An investigation against Galkina or any other curler has not yet been officially announced by the WCF, but they revealed a study is ongoing when contacted by insidethegames in November.