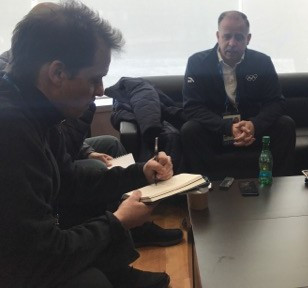 Prince Feisal, chair of IOC Committee set-up four years ago in an attempt to tackle the subject. was speaking as the fallout continues following the scandal surrounding former USA Gymnastics doctor Larry Nassar.

Also, like at Rio 2016, an IOC safeguarding officer is present here who it is claimed athletes can confidentially report cases to.

Prince Feisal believes that the problems is both a cultural and a technical one in terms of formulating and implementing solutions.

"You have to put the legal structure in and I think it is important that people understand there should be a due process mechanism - protected athletes and those accused - to reach real justice," he said here today.

"It is not a simple solution.

"Culture is not something that transforms overnight.

"The first mechanism in effecting that change is recognising that this is a societal and a global problem.

"It starts with awareness and a lot of cultures, unfortunately, don’t always see this is a form of harassment."

Prince Feisal added: "When they recognise this over time, hopefully such ideas will be alien to our society and I hope by Tokyo 2020 we can talk about how many NOCs and IFs have taken steps to address this issue.

"We as the IOC would be failing in our job if we did not try and protect athletes - this is what we would love to do.

"It's going to take time and hard work, but I'm hoping that in 10, 15 years people describe this as a watershed moment and say we addressed the issues.

"I'm realistic enough sit there and say it probably will take at least a decade if we're going to address it comprehensively, if not more."

Nassar, national medical coordination officer for USA Gymnastics between 1996 and 2014, was jailed for up to 175 years last month on seven counts of criminal sexual abuse against athletes.

This included allegations surrounding his work during London 2012.

An independent investigation has been commissioned by the United States Olympic Committee (USOC), who admit to having let down athletes but vow to have acted according to their rules when first informed of the allegations in 2015.

The investigation was welcomed by the IOC, although they stopped short of vowing to interfere and sanction USOC, USA Gymnastics and other bodies themselves.

"If we have the right frameworks and put the right safeguards in place, that should naturally forewarn this," Prince Feisal said.

"It shouldn’t be for the IOC specifically to have to sanction.

"You have to put the legal structure in and I think it is important that people understand there should be a due process mechanism - protected athletes and those accused - to reach real justice."

Prince Feisal denied claims that the IOC have failed to tackle the issue seriously after facing similar claims about their response to doping issues.

He also called on the media to do more to look into possible wrongdoing elsewhere in the world.

"I'm sure it is happening all over," he said.

The full toolkit can be accessed here.