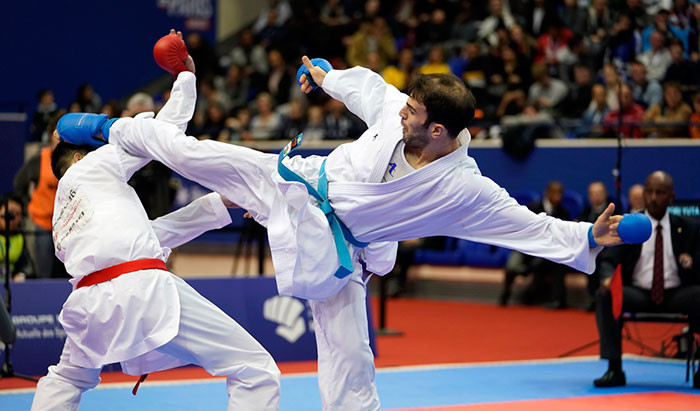 Japan dominated the first event of the international season, the Karate1 Premier League in Paris, but the hosts also had a memorable competition as they won three golds.

Ryo Kiyuna and Kiyou Shimizu guided Japan to a demonstration of first-class karate at the Stade Pierre de Coubertin.

French karatekas and Grand Winners also took the spotlight, while upcoming athletes delighted enthusiasts of the sport with surprising victories over the top favourites.

Against one of the biggest surprises of the competition - Yi-Ta Wang of Chinese Taipei - the world champion Kiyuna put his powerful kata style into action and won his 14th consecutive gold medal by unanimous decision.

"As we get closer to the Olympic Games Tokyo 2020, the level of all the countries in kata is growing," said Kiyuna.

Another Japanese karateka, 22-year-old Ken Nishimura, produced one of the shocks of the tournament in the male kumite under 75 kilograms final by defeating Rafael Aghayev, Azerbaijan’s five-time world champion and 10-time European title-holder, by 2-1.

It was not all disappointment for the French.

Alizee Agier used the home-crowd factor to claim her third victory in Paris.

The 2014 world champion defeated Japan’s Kayo Someya in the final of female kumite under 68kg by 4-0, thus winning her fifth consecutive medal in Karate1 events.

Twenty-one-year old Steven Da Costa, beaten in his last three appearances in Paris, put an end to his home losing streak in the male kumite under 67kg, where he earned a tense 1-0 win over Japan’s Hiroto Shinohara.

"I am very glad it went this way because to start the season with a medal and doing it at home is great," Da Costa said.

"This victory in front of my family was fantastic for me."

The list of winners for the host nation was completed with Nadege Ait-Ibrahim‘s triumph in female kumite over 68kg.

China’s Grand Winner Xiaoyan Yin proved too much for France’s hugely promising Gwendoline Philippe in the female kumite under 61kg, although the 18-year-old made her work for her win in a 4-3 decision.

Sajad Ganjzadeh of Iran was the second Grand Winner prevailing in Paris.

The world champion took his second consecutive gold in Paris with a 3-1 victory over France’s Mehdi Filali in the male kumite over 84kg.