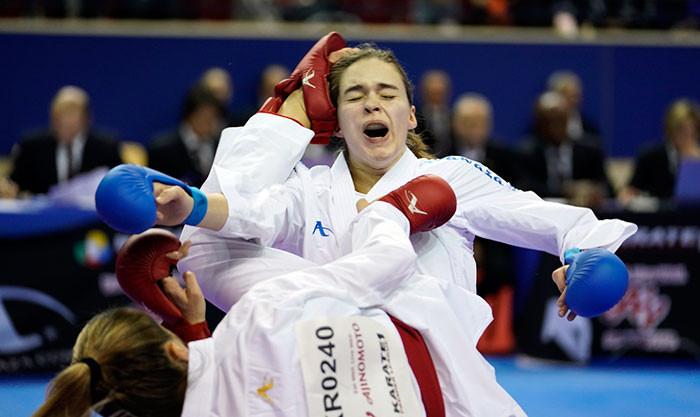 World champion Alexandra Recchia delighted the home crowd as she progressed to the final of the women's under 50 kilograms kumite event at the Karate1 Premier League in Paris.

Recchia did not disappoint as she won all four of her bouts in convincing fashion on the opening day of the season's curtain-raiser at the Stade Pierre de Coubertin.

The 29-year-old dispatched Shara Hubrich of Germany 5-0 in her semi-final to set up a meeting with Miho Mihayara of Japan in the final, due to take place on Sunday (January 28).

World Championships under-67kg bronze medallist Steven Da Costa was among the other French karatekas to progress as he booked his place in the showpiece contest in his weight division.

Backed by a home crowd inside the arena, Da Costa dispatched Luca Maresca of Italy 3-0 to secure his berth in the final.

Hiroto Shinohara of Japan stands between Da Costa and a Karate1 Premier League triumph on home soil in the French capital.

Elsewhere, Brazilian star Douglas Brose reaffirmed his status as the one to beat in the men's under 60kg kumite event as he cruised through to the final.

Brose will take on Darkhan Assadilov of Kazakhstan for the coveted Paris Premier League gold medal in Sunday's final.

Reigning world champion Rafael Aghayev of Azerbaijan demonstrated his recovery after his injuries in the final part of last season and made it to the title-deciding bout at under 75kg.

Japan's Ken Nishimura awaits for the Azerbaijani athlete in the gold medal contest.