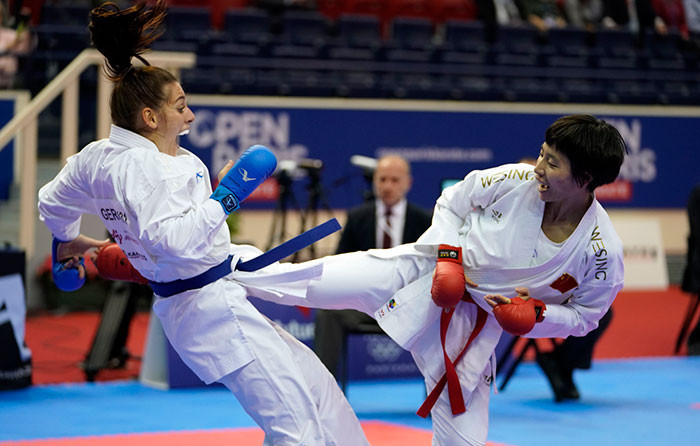 On a day when the host nation saw five of its karatekas progress to tomorrow’s finals at the Karate1 Premier League in Paris, none shone brighter than 18-year-old Gwendoline Philippe, who reached her female kumite under 61 kilograms final by defeating team-mate Lucie Ignace, the current world silver medallist, by an astonishing 10-0 margin.

The final test for the world under-21 champion at the Stade Pierre de Coubertin could hardly be more challenging, however, as she now meets Grand Winner Xiaoyan Yin of China.

The 24-year-old Yin, world ranking leader, maintained her ominous form en route to the final, dominating the pool with four victories by a total of 10-2, concluding with a 1-0 win over home karateka Leila Heurtault.

Philippe commented: "I am so happy because I am so young and this is my first Paris Open.

"I had the chance to make the best of my karate, and I did what I think that I am good at.

"I can’t believe that I will be on the final on Sunday.

"Lucie Ignace is such a wonderful competitor; since I was little I always looked up to her and when I was 12 years-old I saw her becoming world champion at Paris Bercy."

Philippe’s 21-year-old team-mate Nancy Garcia reached her first final in senior competition in the female Kumite over 68kg class and will face another French karateka, Nadege Ait-Ibrahim, who will be trying to improve upon her second place in this event last year.

The host country will also have representation in the finals of the male kumite over 84kg and in female kumite under 68kg.

In the biggest male category, 18-year-old Mehdi Filali earned a first appearance in the final, where he will meet Grand Winner Sajad Ganjzadeh of Iran, the world number one who will  be defending his Paris title.

In the female kumite under 68kg, fan favourite Alize Agieer showed her strength at home and is aiming for her third gold at the Karate 1 Premier League in Paris.

After leading the pool with a total of 7-0 in three bouts, the 2014 world champion claimed a narrow victory over Spain’s Cristina Vizcaino 1-0 to be in the final.

Her opponent is due to be Japan’s Asian champion Kayo Someya, who beat Denmark’s Katrine Pedersen 5-0 to qualify.

World champion Ryo Kiyuna is aiming to extend Japan’s domination in Kata after qualifying for a 14th consecutive final in international competitions having won all his qualifying bouts.

Yi-Ta Wang of Chinese Taipei produced a big surprise with his qualification for the last day of the male kata competition.

The 26-year-old karateka had never qualified for a title-deciding bout in international competitions and only had two bronze medals, but he defeated two of the favourites, Damian Quintero of Spain and Antonio Diaz of Venezuela, to reach his first final.

Egypt’s 19-year-old world under-21 champion Ahmed Elmasry reached his first final in what was only his second senior international competition, and will contest the male kumite under 84kg gold medal with Iran’s experienced Zabiollah Poorshab.

Poorshab, winner of the 2015 Karate 1 Premier League in Paris, is hoping to return to the top of the podium after defeating Grand Winner Ryutaro Araga of Japan in a thrilling semi-final bout.

Araga will defend his Grand Winner status in the third-place bout.

Action is due to continue tomorrow with the third-place bouts.