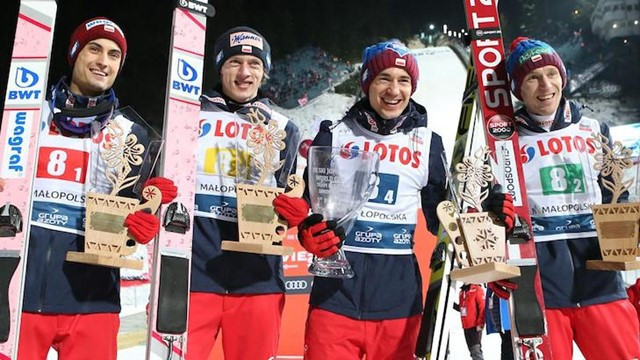 Local hero Kamil Stoch produced a hill record of 141.5 metres with his last effort at the International Ski Federation (FIS) Ski Jumping World Cup in Zakopane to earn Poland victory in the team event, sparking huge celebrations from a crowd estimated at 45,000.

More than 30,000 fans in the arena at the Wielka Krokiew hill and an estimated 15 000 outside the fence saw one of the most dramatic team competitions in recent years as Stoch’s final flourish enabled Poland took finish ahead of Germany and Norway.

It was the first home win for a Polish team and the winning team were involved in lengthy celebrations with the packed crowd.

"I almost lost the balance after the landing in the second round, but this jump was still one of the best jumps I had this season," Stoch, the favourite for tomorrow’s individual competition, said.

"I hope that I can jump even better in the future.

"I think it's possible to jump 145m here and even land with a telemark."

The Norwegians had youngster Marius Lindvik on the team alongside Anders Fannemel, Johann Forfang and, Robert Johansson.

“We weren't jumping on the same level, but our number one jumper, Daniel Andre Tande. was not on the team today due to his sickness,” said Fannemel.

“The Polish and the German team were really good. We have to work hard to beat them at the Olympics, that's our goal."

An appreciative crowd of 7,500 spectators had a great day out in the Slovenian resort of Ljubno – but for Norway’s Maren Lundby it was business as usual as she won her sixth successive individual title, and seventh overall, in this season’s women's World Cup.

"Today I made two perfect jumps, I‘m very well prepared, and this is the outcome," said Lundby, who has reached the podium on nine occasions this season.

"I take the jumps one by one, so I’m looking forward to tomorrow.

"I think about the Olympics but am still focused on the competition here in Ljubno, where it is nice to jump in front of so many people.

"This is really a special place for the women ski jumping."

Althaus, who has been on the podium in every competition in which she has taken part, commented: "I was not satisfied with my first jump, but the second was very good."

Austria's Olympic silver medallist Daniela Iraschko-Stolz made an impressive return to World Cup competition after injury as she finished fourth.