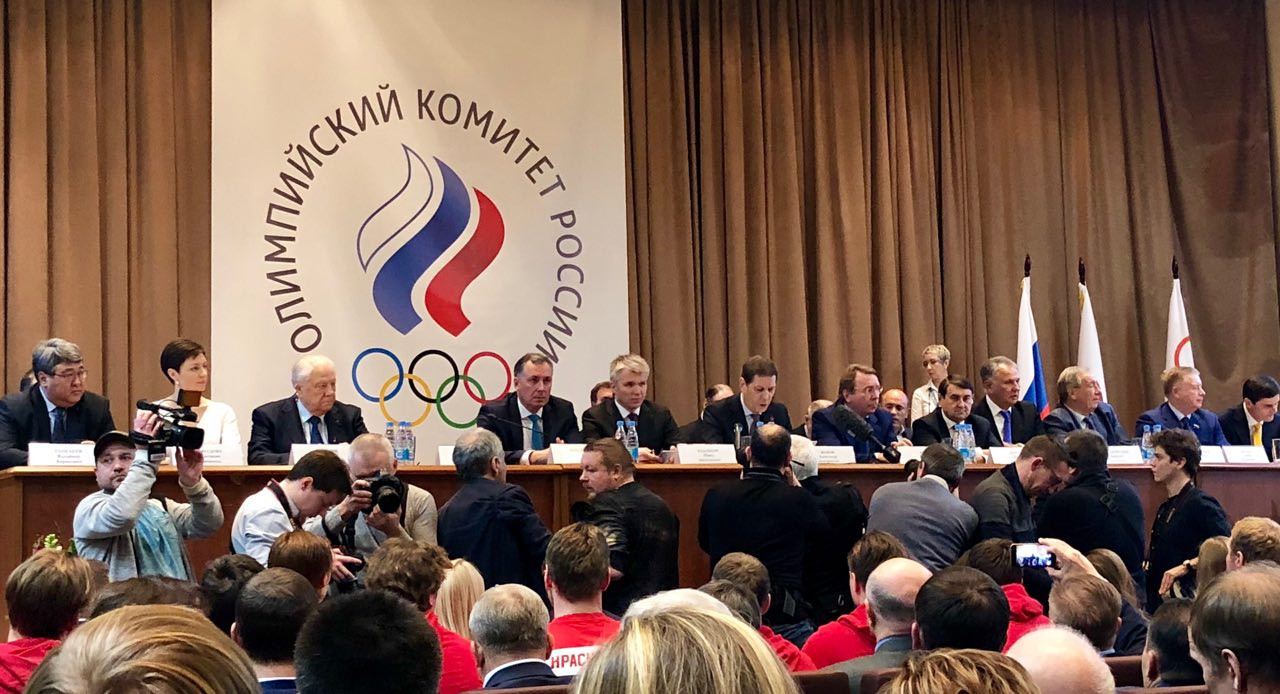 The Russian Olympic Committee has voted unanimously to agree to let the country's athletes compete under a neutral flag at Pyeongchang 2018.

The decision to take part in the Winter Olympic Games was taken at the ROC Olympic Assembly in Moscow, despite the anger felt in Russia at last week's decision by the International Olympic Committee (IOC) following claims of "systemic manipulation" of the anti-doping systems at events, including the 2014 Winter Olympic Games in Sochi.

Alexander Zhukov, President of the ROC, who has been suspended as a member of the IOC as a result of the scandal, was among those who spoke up in support of letting Russia's athletes compete at Pyeongchang 2018.

Sofya Velikaya, head of the ROC Athletes' Commission, also told delegates that they were prepared to compete under a neutral flag.

Russian President Vladimir Putin had promised that even after the IOC announcement that athletes must compete under the banner of "Olympic Athletes from Russia" (OAR) and the Olympic anthem would be played if they won a gold medal he would not prevent them from competing at Pyeongchang 2018.

The ROC now plan to set up a working group to liaise with the IOC, who have established their own commission under member Nicole Hoevertsz, to discuss which Russian athletes will be eligible to compete at Pyeongchang 2018.

A delegation from Russia is due to travel to Lausanne on Friday (December 15) to hold further discussions with the IOC.

Invitations to compete at Pyeongchang 2018 will be decided by a panel headed by Valerie Fourneyron, chair of the new Independent Testing Authority, and which will also include Richard Budgett, medical and scientific director of the IOC, and one person each appointed by the World Anti-Doping Agency and the Global Association of International Sport Federations' Doping-Free Sport Unit.

Athletes cannot have been disqualified or declared ineligible for any doping violations and must have undergone pre-Games targeted tests recommended by a testing task force and undergo other testing requirements specified by the panel before they are declared eligible to compete at Pyeongchang 2018.

Zhukov, nevertheless, has claimed that up to 200 Russian athletes could be eligible to compete under the OAR banner at Pyeongchang 2018.

He also warned that Russia would appeal against the exclusion of athletes because they had previously been banned for drugs.

"The main issue is discussing [with the IOC] the invitation to the leading sportsmen," he told Russia's official states news agency TASS following the ROC Olympic Assembly.

"It will be strange if they invite the fourth or fifth numbers, and the strongest will not be invited.

"There will be a discussion of the form and other issues.

"The decision that the IOC will not invite athletes who have ever violated the anti-doping rules can be appealed in the Court of Arbitration for Sport."

Russia national hockey team captain Ilya Kovalchuk claimed even competing under the OAR banner, and faced with the prospect of not hearing their national anthem if they win. they would still be motivated to do well at Pyeongchang 2018.

"Well, we are athletes from Russia," he said after addressing the Assembly.

"Sure, they’ve taken the flag and the anthem away, but they haven’t taken our honour, conscience, patriotism, love for the country.

"That’s in your heart and no one can take it, so we should get out there and fight twice as hard."

Russians selected for Pyeongchang 2018 were promised that "all stakeholders" would "help in organising athletes' participation, including solving financial, technical, organisational and other issues".

Long jumper Darya Klishina was branded a traitor by some Russians after she was the only athlete to compete at Rio 2016 following the International Association of Athletics Federations' ban.

The ROC also signalled they would continue to stand by athletes banned from Pyeongchang 2018 after being retrospectively disqualified from Sochi 2014 and who have been banned from the Olympics for life by the IOC.

Another proposal was "to support the athletes who deserve to be at the Olympic Games but didn't receive the invitation from the IOC," point four four of the decision said.

"We made the right decision in the interests of our athletes," he said.

"The boycott of the Olympics is a dead end.

"This is the way to nowhere.

"Participation in the 2018 Games is an opportunity to restore your status, position, good name."

But Zhukov continued to deny the ROC or the Russian state were involved in the doping programme that has cast such a shadow over Sochi 2014.

He continued to lay the blame on Grigory Rodchenkov, the former director of the Moscow Laboratory and mastermind of the programme, he claimed with the help of the Russian Government, before fleeing to the United States and becoming a whistleblower.

"The Schmid Commission gave an exhaustive description of Rodchenkov and his accomplices," said Zhukov.

"They caused enormous damage to Russian sports and the international Olympic Movement. "

The decision to formally allow Russia's athletes to compete at the Winter Olympic Games was welcomed by Pyeongchang 2018.

"Even though the athletes won't be able to wear their national flag, they may be able to hoist it during the Closing Ceremony."