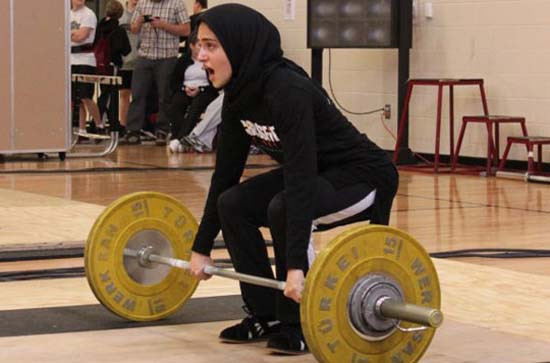 One of the last remaining barriers to gender parity in weightlifting is to come down next year when women from Iran and Saudi Arabia compete internationally for the first time.

These are the two biggest Islamic countries never to have taken part in the sport, which was officially sanctioned by the International Weightlifting Federation (IWF) in 1983.

Women have competed at the World Championships since 1987 and at the Olympic Games since 2000 but several Islamic countries have never taken part, including these two plus Kuwait, Bahrain, Oman, Somalia and Libya.

"The biggest barrier is culture and religion," Attila Adamfi, director general of the IWF, said.

"They have high capacity like men athletes, and I hope that, wearing special clothes for Muslim athletes, they will be able to take part in international championships in the near future."

Moradi is expected to reveal more details, as are the Saudis, next week at the IWF World Championships in Anaheim in California, which are due to start on Tuesday (November 28).

There is a possibility that Iran’s first international competition will be a friendly match against the United States, whose President, Donald Trump, has identified Iran as one of his nation’s biggest enemies.

Despite Iran having been blacklisted by Trump, the US is planning to send a women’s delegation to Iran next March, as well as a men’s team to compete in the Fajr Cup in Ahvaz.

Moradi has invited the US to compete in the Fajr Cup, a men’s invitation competition, and has also asked them to send a women’s team.

The Americans have accepted on both counts, and will send female lifters, coaches and technical officials.

"We will comply with Iranian cultural issues, and will help with training of female coaches and technical officials," said Phil Andrews, chief executive officer of USA Weightlifting.

"There may be a friendly women’s international between Iran and the United States.

"Everything is agreed in principle, and we are working on the details,.

"Despite the political differences between our countries we have always enjoyed a very good relationship with the Iranian Weightlifting Federation.

"Our involvement was the idea of the IWF.

"Anything we can do to help, we are more than willing to do so.

"I take my hat off to Ali Moradi and his team.

"I know Iran, being a nation of exceptional achievement in the sport, would not want to see their women competing at international level without being confident of their level of achievement, and we are keen to help them in getting to that level."

Iran has one of the strongest male weightlifting cultures in the world.

It has had seven Olympic champions this century, all of whom will be millionaires, such is the level of payments and bonuses in Iran.

"This [women’s programme] is good news, and it’s very significant in Iran, where weightlifting is at the highest level for men, and zero level for women," said Adamfi.

"To have Iran and USA women lifting together would be great, it would show that sport is above politics."

The IWF changed its rules on clothing in 2011 to allow the hijab, which removed one of the obstacles for Muslim women who wanted to lift.

"That was six years ago and we heard nothing then," said Adamfi.

"Discussions with Iran and Saudi Arabia started within the past year, but we couldn’t do anything ourselves until they had local authorisation – the key is local change.

"I’m not sure whether they are at the point of allowing women into weightlifting or encouraging it, which clearly are two different phases."

It is an aim of the governing body to have weightlifting for men and women in every country.

Last year at the Olympics in Rio de Janeiro, Sarah Ahmed, from Egypt, became the first woman from the Arab world to stand on the podium at the Olympic Games.

Saudi Arabia and Iran both have men’s teams in Anaheim, though the Iranians were not sure they would get visas until confirmation arrived today.

Kianoush Rostami, the Olympic champion and world record holder at 85 kilograms, had originally been denied a visa but said from his home yesterday that he was successful with his second application.

The "political differences" mentioned by Andrews have made it very difficult for Iranians to travel to the US, because of restrictions imposed by Trump.

When the International Association for Physical Education and Sport for Girls and Women held its Annual Congress in Miami this year, 18 Iranian academics - who would have discussed, among other things, opportunities for Muslim girls to take part in sport - were denied visas by the US State Department

Ursula Papandrea, a former international lifter who heads the IWF Women’s Commission and is President of USA Weightlifting, said: "It’s hard to achieve gender parity, as per International Olympic Committee policy, when you don’t have full women’s participation in some countries, where it’s only men’s weightlifting.

"The idea of going into countries that are willing to introduce women’s weightlifting, especially in cultures where it has generally been not allowed, is of course an area we need to find support for.

"Iran gives us an opportunity to do that from the beginning.

"We will also be able to highlight to these women the adverse health effects of doping."

Papandrea, who represented the US before the sport became part of the Olympic Games in 2000, is the highest qualified female coach in her country.

Asked if Iran’s arrival represents the last frontier for women’s weightlifting, she said: "I would say some of the Islamic countries, period."