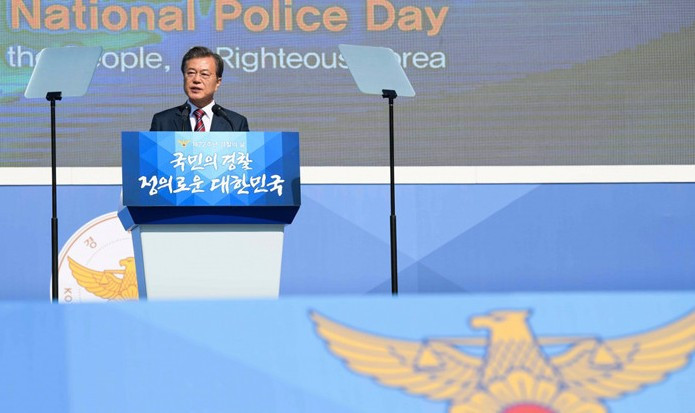 South Korea President Moon Jae-in has promised once again that his country will be safe to visit during the next Winter Olympic and Paralympic Games in Pyeongchang.

Moon was speaking during a ceremony held in Seoul's Gwanghwamun Square to commemorate the 72nd National Police Day.

He urged police to continue to strengthen their counter-terrorism measures before the Games begin.

“Tourists coming to Korea from around the world have cited ‘safety’ as the most satisfying factor of their travels here," Moon declared.

"Our nation has been designated as the country with the ‘safest public order in the world’ for the past two years.

“All of our police forces must protect visitors, as well as Olympians, from any act of terrorism.

“Our police have successfully maintained security at previous international sporting events, including the Seoul 1988 Olympic Games, the FIFA 2002 World Cup, the International Association of Athletics Federations 2011 World Championships in Daegu and at the Gwangju 2015 Universiade.

“I ask the police to prove to the world once again, this time in Pyeongchang, that Korea is the safest nation in the world."

Moon and other Government colleagues are delivering messages promising the safety of the country on an almost daily basis in an attempt to downplay safety concerns.

French Sports Minister Laura Flessel warned last month that if the crisis deepened and "our security cannot be assured, the French Olympics team will stay at home".

Alfons Hörmann, the President of the German Olympic Sports Confederation, also claimed he would understand if his country's athletes did not want to compete because of safety concerns.

But a flood of other sports officials have come out and publicly declared that they have no safety concerns and fully intend to participate.

This includes the International Olympic Committee.

They also claim to be "closely monitoring" the situation on the Korean Peninsula and that they have been in "close contact" with Governments and the United Nations over recent months.

The Winter Olympics are due to take place in Pyeongchang from February 9 to 25, with the Paralympics following from March 9 to 18.