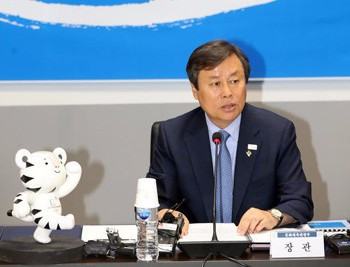 South Korea's Culture Minister Do Jong-hwan has tried to reassure diplomats in Seoul that next year's Winter Olympic and Paralympic Games will be safe.

Do, the Minister of Culture, Sports and Tourism, attended the opening of "World Culture Collage," a variety of cultural programmes aimed at celebrating the cultural heritages of the countries taking part in the Games, due to take place from February 9 until 25.

"This Olympics will contribute to peace and stability on the Korean Peninsula and in Northeast Asia.," he told 40 dignitaries from 23 nations, including 12 ambassadors, who attended the ceremony at the Geumcheon-gu office in Seoul.

"And it will be one of the safest Olympics ever."

Do said: "We also hope everyone supports an Olympic Truce resolution that will be adopted on November 13."

The United Nations General Assembly in New York City is due to vote on the Olympic Truce proposal submitted by the South Korean Government on November 13.

The cultural programmes, which started on September 30 and are due to take place until November 5, cover various art forms such as plays, performances, exhibitions and concerts.

They will take place at 46 locations nationwide.

Later in the day, the attendees are scheduled to watch two performances - "Tape Riot" by Swiss group Asphalt Piloten and "Dance Moi En L'air" by Joli Vyann and L'Eolienne, as well as a photo exhibition "Arctic Impressions Exhibition".