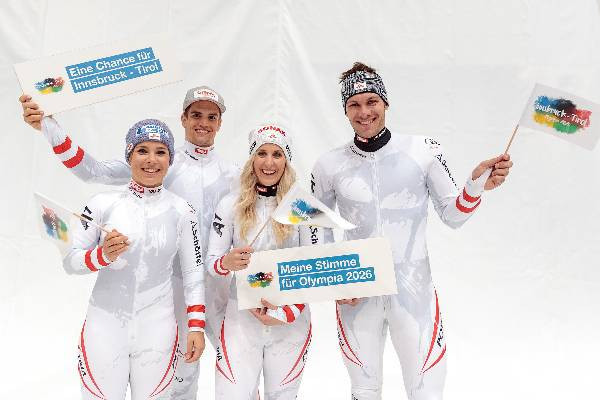 Innsbruck's bid for the 2026 Winter Olympic and Paralympic Games is over after Tyrol voted against the Austrian city's candidature during a crucial referendum today.

A total of 53.35 per cent of those who voted across the 279 municipalities rejected the idea of potentially hosting the Games.

Innsbruck's bid needed a simple majority in order to progress to the next stage but fell short of the required target.

It marks the latest European city to suffer a defeat in a referendum on a bid for the Olympics and Paralympics.

The turnout was 58.43 per cent of eligible voters and there were 1,444 invalid votes cast.

The result comes amid a continuing trend of apathy towards hosting the Games and follows several of Innsbruck's European counterparts being forced to withdraw bids for previous editions of the event after losing referendums.

The International Olympic Committee (IOC) are likely to be concerned by the outcome of the referendum as a huge majority voted against the bid in Innsbruck.

IOC President Thomas Bach has previously voiced his hope that the event will return to a traditional winter sport nation, with the next two editions of the Winter Olympics due to be held in Asia.

The outcome of the vote, held alongside Austria's national elections, hinged on the decision in Innsbruck, where 67.41 per cent of 45,711 people voted against bringing the Winter Olympics back to the city for the first time since 1976.

Those behind the Austrian effort had been encouraged by early results, which showed more than 50 per cent were in support of their attempt at the halfway stage.

In St. Anton, the proposed location for the majority of Alpine events along with Arlberg, a huge 85.12 per cent voted in favour, while in Hochfilzen, due to be the venue for biathlon, the figure was 80.71 per cent.

Seefeld, which would have staged Nordic sports if the campaign from the Austrian city is successful, also gave Innsbruck's candidature the green light, with 65.40 per cent answering yes.

But Kühtai, where snowboarding and freestyle competitions would be held, went against, with 56.26 per cent voting no.

The district capital cities of Reutte, Kitzbühel, Schwaz and Lienz also voted against the bid.

The Austrian Government gave their backing to Innsbruck's attempt in June but it needed the support of voters in 279 municipalities in Tyrol for it to go ahead.

The result, which deals a huge blow to the IOC and supporters of the bid, came despite Innsbruck, the 2010 Winter Youth Olympic Games host, pledging to use several existing venues in the region.

It was claimed that no permanent new buildings would be required with events spread around the whole of Tyrol state.

A streamlined bidding process for the 2026 Games was launched last month in an attempt to reinvigorate it following a spate of withdrawals for the 2022 and 2024 Summer and Winter Olympics respectively.

Budapest, Hamburg and Rome all withdrew from the 2024 bidding process, which ultimately concluded with the double award of the Olympic Games to Paris in 2024 and Los Angeles in 2028.

Only Almaty and Beijing bid for the 2022 Games after Stockholm, Lviv, Kraków and Oslo all pulled out.

Several cities had expressed an interest in 2026, although Sion's potential candidature was dealt a blow when the Swiss Government delayed a decision on whether or not they will back their bid.

Today's decision also improves the chances of the United States entering the race.

United States Olympic Committee (USOC) chairman Larry Probst said during the organisation's Assembly in Colorado last week that they were targeting 2026 or 2030.

Although admitting 2030 would be the more ideal choice in order to avoid a conflict with Los Angeles 2028, Probst said the USOC would "want to be in that conversation, at the table for that discussion" if the IOC pursues another double award.

It suggested the US are positioning themselves as a possible candidate for 2026 if the IOC were not able to find a viable host from those cities who have expressed an interest in hosting the event so far.