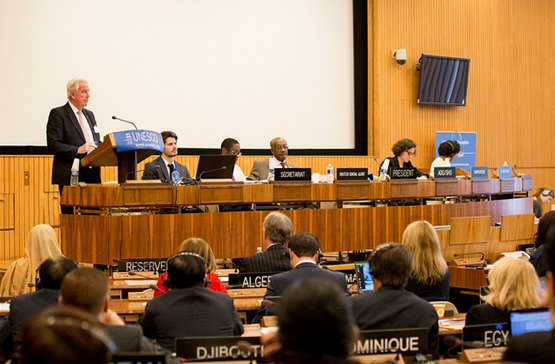 World Anti-Doping Agency (WADA) President Sir Craig Reedie has suggested the introduction of a framework of sanctions for Governments ruled to have fallen foul of the UNESCO International Convention against Doping in Sport.

The move, proposed during a speech at the 6th UNESCO Conference of Parties in Paris, would presumably be along a similar lines to the "graded system of sanctioning powers" currently being proposed for WADA to themselves wield again non-compliant sporting bodies.

At present, there is no structured system of punishments which can be introduced against bodies deemed non-compliant with anti-doping rules.

"Further to a strong athlete appeal, in November 2016, WADA’s Foundation Board endorsed a graded sanctioning framework; which, specifies a range of graded, proportionate and predictable consequences for non-compliance with the Code by a Signatory," Sir Craig said.

"In May 2017, the Board approved its development, which requires WADA to amend a very limited number of Code provisions related to compliance, and to develop an International Standard for Code Compliance by Signatories.

"A robust stakeholder consultation process started in June 2017 with the view to seeking approval at our November 2017 Foundation Board meeting and the changes entering into effect in early 2018.

"We are confident that, once in place, this will serve as a powerful deterrence mechanism for Code Signatories.

"We believe that, 12 years after adoption of the Convention, this Assembly may, similarly, wish to consider development of such framework of consequences - which would be respectful of UNESCO’s role, mandate and culture and that would encourage State Parties to fully implement all the requirements of the Convention."

The UNESCO International Convention against Doping in Sport was introduced in 2005 as part of an attempt to persuade Governments to take "concerted action" against "unethical behaviour, in particular doping in sport".

It has been signed by all but nine countries around the world and has seen funding provided to anti-doping projects across the world.

Many anti-doping officials privately admit that it is a toothless document, however, which harbours little influence in the practical persuasion of dopers.

A system consisting of three differing levels of offences is currently being considered by WADA against sporting bodies.

This will begin with low level administrative problems relating to procedural issues threatening compliance with the World Anti-Doping Code.

The most serious faults such as the Government interference and direct manipulation of the system seen allegedly in Russia in recent years will make up the third group.

Others in the sports world have voiced reservations about granting WADA this power.

He also requested help in facilitating the "sharing of information and coordination between Anti-Doping Organisations and public law enforcement authorities at the national and international levels".

"I would ask you to keep your current and future athletes top of mind during your deliberations," the Briton concluded.

"They make us proud every day through their excellence and perseverance.

"We owe them ‘our best’ in order to protect their right to clean sport."