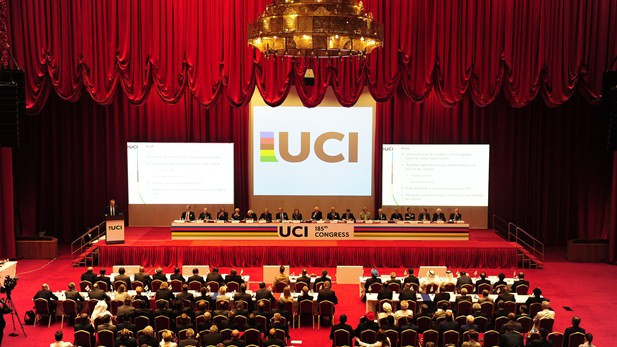 Incumbent Brian Cookson and French challenger David Lappartient will discover tomorrow who will win the election to become the International Cycling Union (UCI) President at the governing body’s Congress here.

The Congress is due to take place on the rest day of the UCI Road Cycling World Championships.

Cookson, elected President in 2013 after a bitter race against Ireland’s Pat McQuaid, will be seeking to secure a second term in office.

The 66-year-old Briton claimed last week at the International Olympic Committee (IOC) Session in Lima that he was confident of the support of 30 of the 45 voting delegates assembled this week.

It is thought the race will be a far closer affair, though,, with as little as one or two votes likely to separate the two candidates.

The voters include nine delegates each from Africa, the Americas and Asia, with three more from Oceania.

Europe has the largest bloc with 15 delegates.

It is expected that Lappartient will receive a strong amount of support in this bloc, given the Frenchman has served as the European Cycling Union President (UEC) since 2013.

Should the former French Cycling Federation President receive unanimous support it would be a significant boost to his election chances, although Cookson has expressed his hope of earning the backing of several European delegates.

The Briton is expected to have support in Africa, the Americas and Asia.

Cookson has claimed former rival McQuaid has been actively campaigning for Lappartient to win the election, with suggestions the Frenchman had offered him the position of UCI Honorary President.

He has called for the voting delegates to judge him as a candidate who has delivered change and enhance the governing body’s credibility.

"The UCI is unrecognisable from the chaotic and dysfunctional state it was in when I took over as President four years ago, cycling was broken and its credibility lay in tatters under the old regime," Cookson said.

"Our transformation has not happened by chance, but through a huge amount of hard work and determination to transform the UCI into a world class governing body which sets a global standard.

"Voting delegates have a clear choice between someone who has kept his word, delivered change, and restored the UCI’s credibility, and someone who has allied himself with, and is supported by, the forces of the past."

Lappartient’s camp have rejected claims the 44-year-old has sought the support of McQuaid, claiming the former UCI President has been acting on his own.

Having sought to distance himself from McQuaid, who is in attendance here at the Championships, Lappartient has vowed to put himself at the service of National Federations, should he be elected tomorrow.

Campaigning with the slogan "Our Passion", Lappartient has claimed he has demonstrated his credentials during his two terms at the French Cycling Federation and as President of the UEC.

"Over the past few months, I have shared with you my four-year plan to genuinely develop cycling worldwide," Lappartient said.

"I have listened to all of you and understand your needs.

"National Federations are the backbone of the UCI and with me as the President, your voice will be heard and your concerns addressed.

"Together, we will make cycling the sport of the 21st century."

Candidates will also be seeking positions on the UCI Management Committee during tomorrow’s Congress, with seven positions available as UEC representatives.

Mohammed Belmahi of Morocco will seek re-election as the sole African representative but will be challenged by Lucas Georges of Seychelles.

Australia’s Leeanne Grantham and Tony Mitchell of New Zealand are the candidates seeking the Oceania spot.