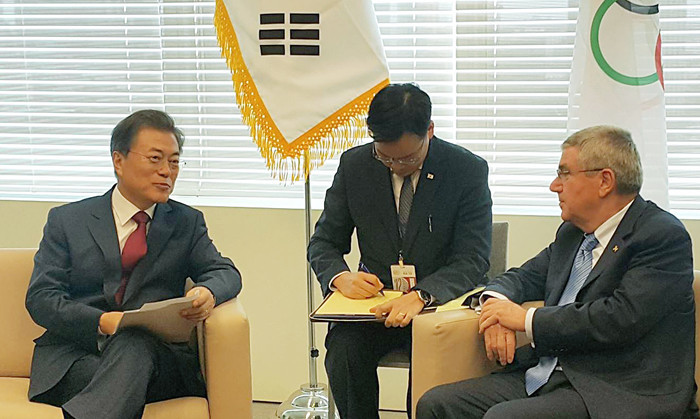 South Korean President Moon Jae-in has sought to assure the world that next year's Olympic and Paralympic Games in Pyeongchang will not be threatened by regional tensions following a meeting with International Olympic Committee (IOC) President Thomas Bach.

The pair met during the 72nd Session of the United Nations (UN) General Assembly in New York City.

Concerns have grown in recent weeks following a series of missile launches by North Korea, the latest of which flew over the northern Japanese island of Hokkaido last Friday (September 15).

Tensions could raise further tomorrow after Moon delivers a keynote speech at the UN calling for the world community's cooperation in implementing the UN Security Council sanctions against Pyongyang and outlining Seoul's North Korea policies.

"Given the current state of affairs on the Korean Peninsula, the world coming together as one on the stage of the Pyeongchang Olympics will help to quiet security concerns and establish peace and stability across the region," Moon, asking for the IOC's full cooperation, said.

Moon also reiterated how the country has successfully hosted other events, including the Seoul 1988 Olympic Games, despite similar tensions.

"Korea, a divided nation, successfully hosted the summer Olympics in 1988," he told Bach.

"By bringing together a record number of countries from the Eastern Bloc and the West during the Cold War, we were able to stage an Olympics of peace and harmony.

"The Seoul 1988 Olympics played an instrumental role in breaking down barriers created by the Cold War."

Bach, in turn, was quoted as praising the "significant progress" being made by South Korea to make the event a success before expressing hope that North Korean athletes would qualify.

The German insisted during last week's IOC Session in Lima that there was "not even a hint that there is a threat" to the security of the Games.

He has, however, vowed to avoid getting involved in any efforts to find a diplomatic solution to North Korea and is instead seeking to finalise an Olympic Truce declaration.

"South Korea has submitted a draft resolution for an Olympic Truce to start just before the Games," said Moon.

"This resolution will be put to a vote at the UN General Assembly on November 13.

"If the resolution is adopted, with support from many countries, there will no longer be any reason to worry about security.

"If North Korea participates in the Olympics, safety will be guaranteed even further,"

Bach believes that the signing of the Olympic Truce will have even more significance this year than normally.

"The draft of the Olympic Truce submitted by South Korea has been received favorably by many countries, and we are making significant progress," said Bach.

"Getting countries that are dominant in winter sports to express their faith in the Pyeongchang Olympics is one way to ensure the success of the upcoming event.

"Furthermore, recruiting Korean sports stars to collaborate with overseas athletes to promote Pyeongchang will help, not only to get the Olympic Truce adopted, but to build excitement around the world,"

Moon also held talks with Czech Republic President Miloš Zeman and invited him to the Opening Ceremony of Pyeongchang 2018.