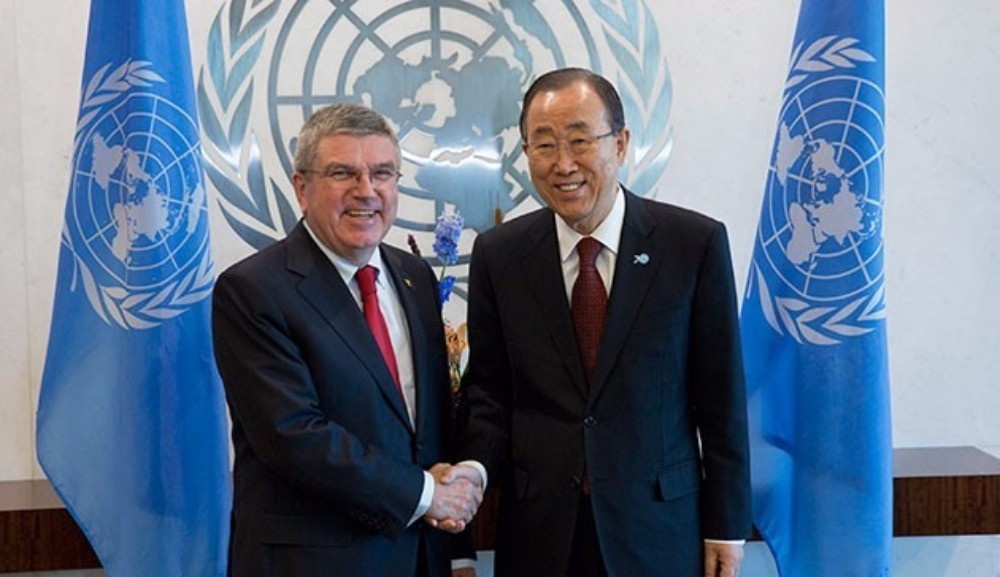 Refugees with ties to no particular country will be able to compete at Rio 2016 under the International Olympic Committee (IOC) flag, President Thomas Bach declared at today's United Nations General Assembly in New York City.

The IOC have made demonstrating the wider role of sport in society a priority since Bach assumed the Presidency in 2013, and last month unveiled an emergency fund of $2 million (£1.3 million/€1.8 million) for National Olympic Committees to fund programmes aimed at helping refugees.

Today's announcement, however, relates specifically to high-level refugee athletes, with Bach vowing to "help them to make their dream of sporting excellence come true even when they have to flee from violence and hunger".

The German added: "I am happy to announce to this UN General Assembly that the International Olympic Committee will invite the highest qualified refugee athletes to participate in the Olympic Games Rio de Janeiro 2016.

"They will have a home together with all the other 11,000 athletes from 206 National Olympic Committees in the Olympic Village.

"This will be a symbol of hope for all the refugees in our world, and will make the world better aware of the magnitude of this crisis."

It is not yet clear how exactly this would work in practice, and how easy it would be for those lacking a specific NOC to participate in this way, but competing under the IOC umbrella is increasingly being used as a means for those unable to otherwise participate to compete at the Games.

South Sudanese marathon runner Guor Mading Maker competed under the Olympic Flag at London 2012 because his nation was yet to be IOC-recognised, while three Indian athletes also did so at the Sochi 2014 Games, when their nation was suspended from the IOC.

Bach's speech today came as 180 of the 193 UN members approved a resolution calling for the observance the Olympic Truce for next summer's Games in Rio de Janeiro.

A tradition dating back to the Ancient Olympics which was revived in 1993, the symbolic Truce will come into operation seven days before the Games begins, and aim to maintain values of tolerance, solidarity and peace for its duration.

"This is the time when the international community comes together for peaceful competition," Bach, who stopped in New York City on his way to attending the ANOC General Assembly here on Thursday and Friday (October 29 and 30), added.

“In the Olympic Village, we see tolerance and solidarity in their purest form.

"Athletes from all 206 National Olympic Committees live together in harmony and without any kind of discrimination.

"This is the true spirit of ‘Olympic Unity in Diversity’ - athletes from every corner of the world, living together under one roof.

In his lengthy address, the latest of several speeches he has given to the UN in recent months, Bach also urged all sporting bodies to comply with values of transparency and good governance in what an be taken as an implicit criticism of football governing body FIFA following the suspension of its President Sepp Blatter following a latest raft of corruption allegations.

This follows a public warning given by Bach to FIFA last month claiming that "enough is enough" and more than a change of President is required.

"With our Olympic Agenda 2020 we are fully aligned with the United Nations 2030 Agenda," added Bach.

"In particular this is true for Goal 16 of the Sustainable Development Goals, which is about building accountable, effective and inclusive institutions.

"The IOC with its Olympic Agenda 2020 has ensured that we are in compliance with the highest standards of good governance and transparency.

"In this respect, we are asking other major sports organisations to undertake the necessary and swift reforms in order to restore their reputation."

The full text of the Olympic Truce can be read by clicking here.

Related stories
September 2015: IOC announce emergency $2 million fund aimed at helping refugees as crisis in Europe grows
September 2015: David Owen: The migrant crisis gives sport a chance to show how serious it is about making the world a better place
May 2015: Rogge pledges to increase sporting opportunities for refugees in Ethiopia on UN Special Envoy visit
October 2014: Rogge completes first mission as UN Special Envoy with visit to Syrian refugee camp in Jordan
June 2014: IOC and United Nations to work more closely together after talks between Bach and Ban Ki-moon