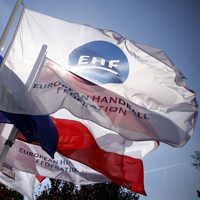 Drug tests were carried out by the EHF's anti-doping unit and analysed at a World Anti-Doping Agency (WADA) accredited laboratory.

One player tested positive in the main round for a substance prohibited under the World Anti-Doping Code while two more provided positive tests in the final round of the competition.

The Russian Handball Federation said in a statement on its website that it was notified of the incident on August 23, confirming the banned substance was meldonium.

Russia took silver at the tournament after losing to France in the final 31-26.

The EHF's anti-doping unit, created in 2012, is an independent body responsible for carrying out anti-doping testing within EHF competitions.

It works closely with WADA to ensure that handball remains "a clean and fair sport".

The EHF has revealed further information on the case will be made available in the coming days.

It comes as Russia remains at the centre of a doping scandal.

The Russian Anti-Doping Agency is still non-compliant with the WADA, although this could be lifted later this year if a series of strict criteria are met.

Two International Olympic Committee Commissions, led by Samuel Schmid and Denis Oswald, are probing the evidence in the McLaren Report, which found evidence of an institutional doping regime at major events including the 2014 Winter Olympic and Paralympic Games in Sochi.

Meldonium was only prohibited by WADA on January 1, 2016.

Swimmer Yulia Efimova and tennis superstar Maria Sharapova were among dozens of top Russian and Eastern European stars to fail for meldonium, a heart medication, which, it is claimed, boosts endurance.

Many, including Sharapova, claimed they were not aware that the product had been banned.