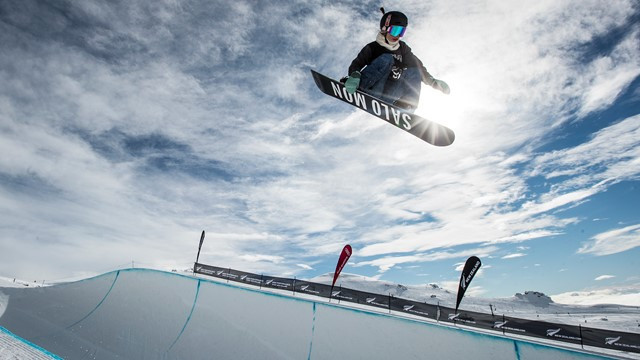 Americans clinched three of the six spots available in the women's final as qualification took place at the Cardrona Alpine Resort.

Maddie Mastro led the way for the US team by claiming the best score of 93.00 from the 30-strong qualifying field.

"I couldn't be happier," said Mastro.

"I'm happy to put it all together especially in the first contest of the season.

"It's important to start the season off on the right foot.

"It really sets the tone for the rest of the Olympic year."

Mirabelle Thovex of France qualified in second position on 91.25, in front of two more Americans.

Kelly Clark, a three-time Olympic medallist, and Chloe Kim were third and fourth respectively on 87.50 and 86.50.

Forty-two male riders competed across two heats with the top three in each sealing a final spot.

Four more places are available from tomorrow's semi-final, which will feature the next five from each heat.

Raibu Katayama of Japan was the best qualifier, winning heat two on 89.00.

Ben Ferguson of the US won heat one with a score of 88.00, after the judges were impressed with his trick combination and risk-taking.

He landed a cab double cork 1080 mute, a double crippler, a backside 360, a "switch McTwist" and a switch alley-oop rodeo.

"It's kind of crazy coming here and doing a contest, having to get my feet under me so quick," said Ferguson.

"It just felt good to land a run.

"I've got a couple more tricks up my sleeve, so hoping to amp it up a bit more for finals."

Two Swiss riders qualified second from both heats, with David Habluetzel scoring 83.66 in the first and Patrick Burgener ending on 82.66 in the second.

The men's final will take place after the semi-final tomorrow.

The event is one of a string of FIS World Cups taking place as part of the Audi Quattro Winter Games NZ in Cardrona.