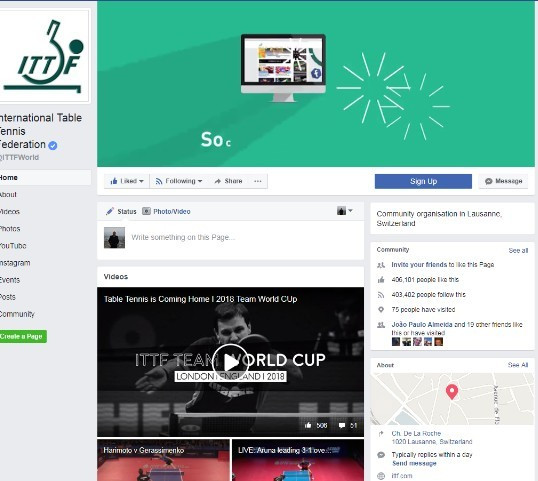 The milestone was reached following strong engagement at this year's World Table Tennis Championships, held from May 29 to June 5 in Düsseldorf, Germany.

The World Championships, the biggest table tennis event of the year, reached more than 10.3 million fans on Facebook over eight days of competition, the ITTF claim.

Together with the ITTF World Tour events that followed, the event pushed the ITTF Facebook page's following to 400,000.

The ITTF's social media has greatly benefited from the popularity of the sport and its stars in China, which is claimed to have "skyrocketed" after last year's Olympic Games in Rio de Janeiro.

The ITTF's Weibo account, which currently has more than 1.3 million fans, stands at the second highest of all International Federations on the Chinese platform.

"It is pleasing to see us hit over two million social media fans around the world," said the ITTF's head of communications Matt Pound.

"This shows the appetite for fans to consume the ITTF's content and the popularity of table tennis globally.

"We look forward to continuing building our fan base and extending the reach of table tennis globally."