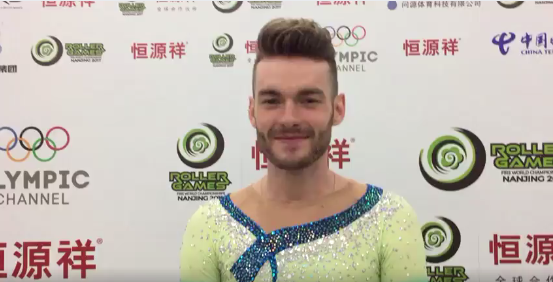 Werle scored 210.70 points and was joined on the podium at the Wutaishan Gymnasium by Italy’s Marco Santucci and Argentina’s Luis De Mattia, the silver and bronze medallists with 208.60 and 205.90 respectively.

In the women's event, favourite Anabella Mendoz of Argentina took the title with 220.70 points

Pfeifer, meanwhile, saw off the challenge of France’s Serena Giraud and Italy’s Metka Kuk with an unrivalled total of 96.62 points.

The United States’ Collin Motley came out the winner in the men’s junior event with 89.62 points.

India’s Abhijith Amal Raj was the runner-up with 85.77 points and Chinese Taipei’s Bo-Yu Chen was the third-place finisher with 74.47.

In the women’s junior event, Italy’s Chiara Censori claimed victory with 89.06 points as Russia’s Anastasia Nosova took the silver medal with 78.96 and Chinese Taipei’s Hung-Yun Chien had to settle for bronze with 64.99.

The final of the men’s under-20 rink hockey competition was also played today with Portugal beating Spain 2-0.

Victory at the Tech University Gymnasium secured the Portuguese their third consecutive title.

Italy claimed the bronze medal with a 6-5 win over Argentina.

Argentina are due to face Spain in tomorrow’s final.

The FIRS World Roller Games are taking place for the first time in one city, seeing the World Championships of 10 roller disciplines take place simultaneously.

It is due to be held until September 10 and will feature different competitions held at indoor and outdoor facilities.