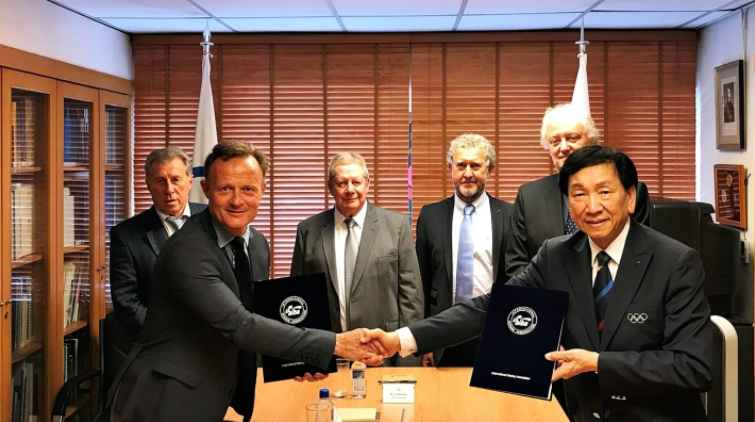 The deal was penned at the ongoing Taipei 2017 Summer Universiade in Wu's homeland Taiwan.

As part of the commitment, both parties have pledged to using boxing as a means of physical and educational development for young people.

AIBA has agreed to use its expertise to assist with the technical aspects of ISF schools competitions, and its coaching infrastructure to ensure the growth of best practices and the latest techniques around the world.

The Belgian-based ISF is recognised by the International Olympic Committee and promote the values and interests of education through sport.

"The values that AIBA and the ISF share are instrumental in ensuring the success of this partnership for the benefit of young people around the world," said Wu.

"For many years, education has been a priority for AIBA and, now more than ever, sport has a vital role to play in the social as well as physical education and well being of young people.

"AIBA looks forward to cooperating with the ISF to bring new opportunities and inspiring future young boxers around the world."

The agreement will see AIBA and the ISF combine resources and efforts to meet their objectives in promoting boxing among young people as a tool, that "helps foster the values of mutual respect, dedication and friendship".

Happy to meet my friend Ching-Kuo WU, #IOC board member and President @AIBA_Boxing to talk about vision of #education and sport #Universiade pic.twitter.com/Un2DWOEwn1

AIBA will be used to draft specific technical regulations for new events as well as providing coaching information, while ISF events will also be used in the practical assessment of young AIBA officials.

"Boxing is one of the most enduring and universal of all sports, and its popularity is as strong as ever among people of all ages the world over," added ISF President Laurent Petrynka.

"The ISF knows that every sport has the power to bring structure and hope to the lives of young people, but boxing involves a unique code among athletes that, alongside AIBA, we want to promote through new School Sport competitions and events."

The partnership will begin during the 2018 Gymnasiade, due to be held from May 2 to 9 in Marrakech.

It comes as Wu retained power of AIBA last week until at least next month, after a Swiss court deferred a ruling on who is in charge of the troubled organisation for the second time.

A power struggle between Wu and an Interim Management Committee has been ongoing in recent weeks.

A final decision on who has control of the embattled AIBA will then be taken in mid-September.