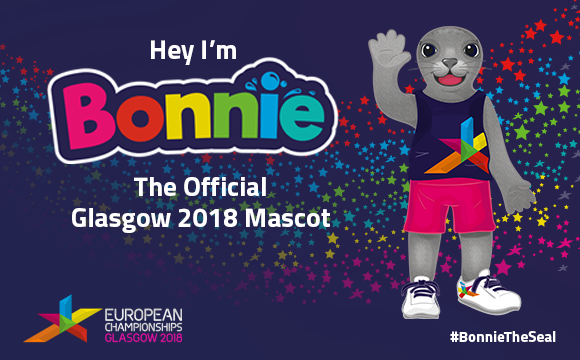 Bonnie the seal has been unveiled as the Glasgow 2018 European Championships mascot with exactly a year to go before the inaugural event in the Scottish city.

The pup seal made her debut appearance at the Scottish Events Campus today, surrounded by 160 children.

Around 100 children aged between seven and 12, chosen from three primary schools, helped to develop Bonnie.

The name - a Scottish word meaning beautiful or attractive - was chosen over Belle, Isla and Star in an online public vote.

According to organisers, Bonnie "doesn't always get things right on first try but knows the most important thing is to at least have a go and try her best".

An entire backstory for the character has been created by children's author Ross McKenzie.

Aileen Campbell, Scotland's Minister for Public Health and Sport, said: "The mascot's fun personality is ideally suited to encourage children to try their hand at new activities and sports.

"This fits perfectly with 2018 as the Year of Young People, and also our priority to increase active and healthy lifestyles.

"I'm sure Bonnie will become a much loved face in Scotland and beyond, helping to build on the legacy from the Games - and of course the legacy of the Glasgow 2018 European Championships."

Glasgow 2018 will bring together the existing European Championships for aquatics, cycling, gymnastics, rowing and triathlon, along with a new golf team event, under the same banner.

It is hoped that holding all the sports together at the same time, and in the same city, will lead to more excitement and exposure than would be possible at stand-alone events.

Athletics will also be held at the same time, but in sister-city Berlin.

Competition will take place in Glasgow, the host of the 2014 Commonwealth Games, between August 2 and 12.

"Today marks one year to go until the biggest sporting event to come to Glasgow and Scotland since we hosted the best-ever Commonwealth Games," said Susan Aitken, the leader of Glasgow City Council.

"As the excitement builds ahead of Championships time, it's fantastic to be able to introduce Bonnie - who will engage with young people and communities across Scotland.

"Her gregarious and playful character perfectly embodies the spirit of the Glasgow 2018 European Championships."

Bonnie joined a dance troupe on stage after Whitlock, who won Olympic gold medals in floor and pommel horse on the same day at Rio 2016, had demonstrated a series of moves.

The British gymnast has good memories of Glasgow after winning the World Championship pommel horse title in the Scottish city in 2015.

"I'm really excited about Glasgow 2018 - it is always great to compete at a multi-sport event and I have always loved it here in Glasgow," the 24-year-old said.

"The crowd is always amazing and give you that extra lift.

"It can make such a difference to your performance out there on the podium.

"I witnessed that first hand during the 2014 Commonwealth Games and again at the World Championships the following year.

Around 3,000 athletes will travel to Glasgow 2018 as part of a total delegation of around 8,500 including officials, media and others.

Attendances of around 250,000 are expected across the six Scottish-based sports.