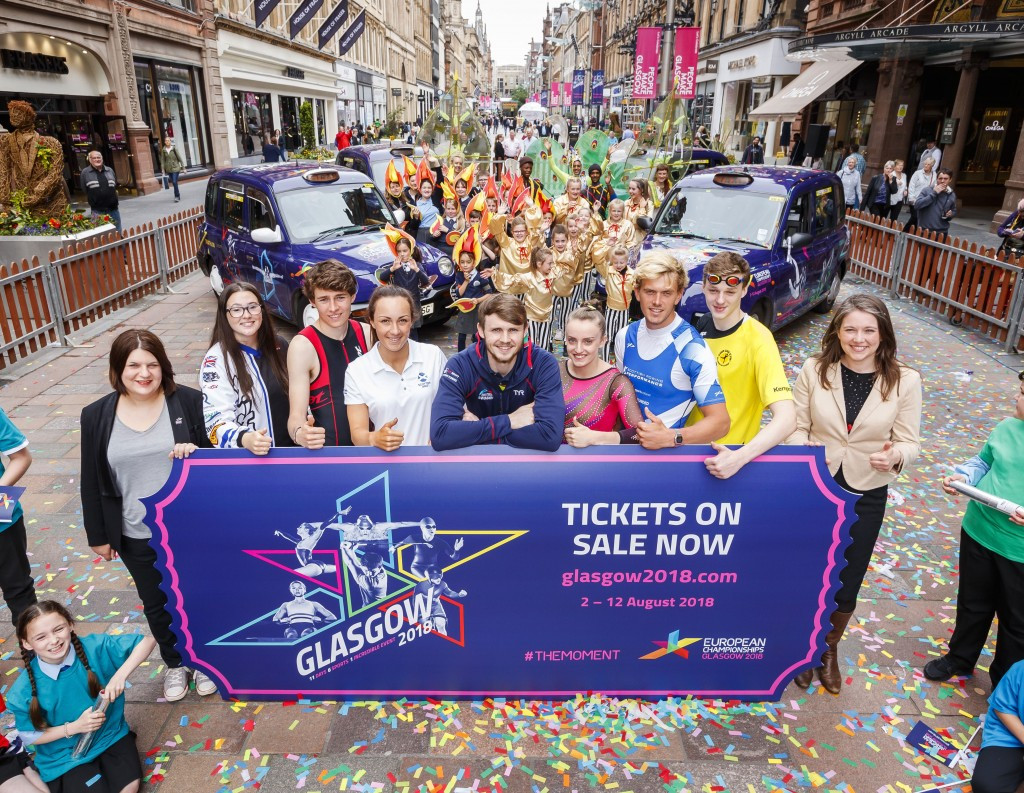 Tickets for the Glasgow 2018 European Championships are now on sale to the public following a launch event here in the Scottish city.

Among those in attendance at the sporting street carnival was Commonwealth Games gold medal-winning swimmer Ross Murdoch, who has been named as the first Glasgow 2018 sporting ambassador.

The 23-year-old, who won 200 metres breaststroke gold at Glasgow 2014 in front of a home crowd at the Tollcross International Swimming Centre, was joined by schoolchildren from Sport Scotland’s Active Schools networks in Glasgow, Edinburgh, Perth and Kinross, West Dunbartonshire and North Lanarkshire along with young sports stars from clubs across the country.

Glasgow 2018 brings together the existing European Championships for aquatics, cycling, gymnastics, rowing and triathlon along with a new golf team championships.

Scheduled to take place next year from August 2 to 12, it is described as a new highlight on the global sporting calendar and the biggest sporting event hosted in Scotland since the Glasgow 2014 Commonwealth Games.

Attendances of around 250,000 are expected across all six sports.

Tickets for all events can be purchased here and will be sold on a first come first served basis, with fans encouraged to book early to avoid disappointment.

There are also a number of free events including the cycling road race and open water swimming.

"I think after seeing the 2014 Commonwealth Games, how big a success that was and how many people got behind it, people actually loved it," Murdoch said.

"I think people maybe underestimated how much they were going to love that and this time I hope people get right behind it a little bit earlier because it’s going to be another fantastic opportunity.

"Tickets are going to go really quick so I’d just encourage people to get out there, get themselves tickets and if you don’t, get out there and volunteer and be involved because it’s going to be a massive, massive opportunity and really shouldn’t be missed."

Murdoch has previously expressed his hope that Glasgow 2018 will provide a major boost to coverage of swimming and he is confident this will be the case.

"I think it definitely can," he said.

"I think there was such a positive reaction to the swimming in Glasgow.

"With Tollcross being such an intimate venue, the supporters were right there on poolside with us when we had our successes.

"And even after the Games were done, there was such a great turn out to swimming competitions so I’d like to think that people will get right behind swimming again, but then again, all sports because there’s so many opportunities.

"It’s all across the country so there’s not really an excuse to be missing an event."

The Glasgow 2018 European Championships is being delivered in partnership with several leading European Sports Federations with support from the Scottish Government and Glasgow City Council.

It will aim to build on the legacy of events such as the Glasgow 2014 Commonwealth Games, the 2014 Ryder Cup and the 2015 World Gymnastics Championships.

The event is also backed by a number of partner local authorities from across Scotland.

"We know the passion and support shown by fans in Scotland helped to make both the 2014 Commonwealth Games and Ryder Cup a huge success and we want that replicated across the country next year," Minister for Sport Aileen Campbell said.

"We are expecting a quarter of a million people to turn out and cheer on some of the world’s top sporting talent at events across Scotland and I encourage anyone who wants to be there and experience that famous Scottish welcome to get their tickets."

Councillor Susan Aitken, Leader of Glasgow City Council, added: "Glasgow is a sporting city like no other.

"We are known all across the world for our passionate fans and warm welcome and nowhere will that be more evident than at the Glasgow 2018 European Championships which will see Glasgow once again take centre stage.

"Glasgow 2018 will be a truly historic sporting moment as Europe’s very best athletes go for gold in our magnificent sporting arenas.

"With attendances of up to 250,000 expected across all six sports it will be an unmissable event, with fans encouraged to book early to avoid disappointment."

More than 3,000 of the best athletes from 52 European nations are set to compete at Glasgow 2018.

The sporting action will take place across 12 venues in Glasgow and Scotland, including gymnastics at Glasgow's iconic SSE Hydro, diving at Edinburgh's Royal Commonwealth Pool, rowing and triathlon at Strathclyde Country Park in North Lanarkshire and golf at Gleneagles in Perth and Kinross.

A number of free events - including the cycling road race through the streets of Glasgow and beyond, open water swimming at Loch Lomond and The Trossachs National Park, and mountain bike at Cathkin Braes - will also take place.

A cultural programme, with Glasgow’s George Square at its heart, will run alongside the sporting action, bringing local communities across the country together with a celebration of Scottish and Glaswegian culture.

Themes from the national Year of Young People in 2018 will also run through the programme.

It is claimed Glasgow 2018, which will be covered by free-to-air broadcasters across the continent, including the BBC, will take Scotland’s sporting reputation to the next level.

"With a potential television audience of up to 1.03 billion across Europe set to watch the action, Glasgow and Scotland will again shine in the global spotlight," a Glasgow 2018 statement reads.