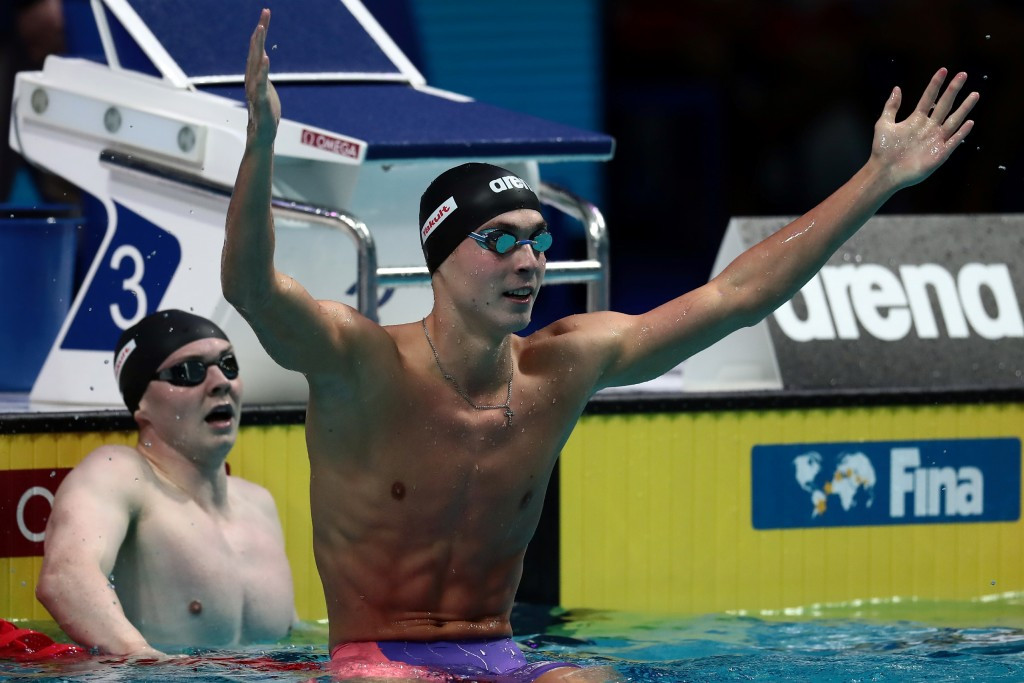 Russia were the biggest winners today at the International Swimming Federation (FINA) World Aquatics Championships in Hungary’s capital Budapest, winning three gold medals out of the five on offer.

The country’s first victory of the day at the Duna Arena came in the men’s 200 metres backstroke as Evgeny Rylov triumphed in a time of 1min 53.61sec.

The 20-year-old, who was the bronze medallist in the same event at the 2015 World Championships in Russian city Kazan and at the Rio 2016 Olympic Games, took control of the race early on and never looked back.

Olympic champion Ryan Murphy of the United States had to settle for the silver medal in 1:54.21.

Fellow American Jacob Pebley rounded out the podium in 1:55.06.

Russia’s other gold medals came in the 200m breaststroke events with Anton Chupkov winning the men’s and Yulia Efimova coming out on top in the women’s.

Chupkov prevailed in a Championship record time of 2:06.96, improving his own performance from the semi-finals when he had clocked 2:07.14.

The Rio 2016 bronze medallist finished ahead of Japan’s Yasuhiro Koseki, who took the silver medal in 2:07.29.

World record holder Ippei Watanabe, also of Japan, came away with bronze in 2:07.47.

The women’s 200m breaststroke final saw Efimova touch home in 2:19.64 to repeat her success from the 2013 World Championships in Spanish city Barcelona.

The 25-year-old was the runner-up in the event at the Rio 2016 Olympics, a Games which she was only granted permission to compete at by the Court of Arbitration for Sport (CAS).

She was initially barred due to an International Olympic Committee rule banning Russian athletes who had served doping suspensions.

Efimova was banned for 16 months in 2013 after failing for the anabolic steroid hormone dehydroepiandrosterone - or DHEA - the previous year.

Efimova further fuelled the flames in recent weeks by releasing a range of signature t-shirts, including one which bears the slogan "Go to CAS".

In the women’s 100m freestyle, the US’ Simone Manuel beat favourite Sarah Sjostrom of Sweden to the gold medal.

Sjostrom seemed to be in control of the race in lane four, but it was Olympic champion Manuel who ultimately won in 52.27.

The Swede, who had set a world record of 51.71 for the distance when representing her country in the 4x100m freestyle, came second in 52.31.

Bronze went to Denmark’s Pernille Blume, the Olympic champion in the women’s 50m freestyle, in 52.69.

Defending champion Bronte Campbell of Australia finished way down in seventh in 53.18.

In the last final of the day, Great Britain retained their men’s 4x200m freestyle title thanks to a decisive last-leg time of 1:43.80 from James Guy.

The quartet, which also featured Stephen Milne, Nicholas Grainger and Duncan Scott, touched for the gold medal in 7:01.70.

America, the runners-up two years ago in Kazan, were the bronze medallists on this occasion in 7:03.18.

The women's water polo final also took place today at the Alfred Hajos Pool, where the US beat Spain 13-6 to secure a record fifth world title.

Olympic bronze medallists Russia ensured they completed the podium with an 11-9 victory over Canada.