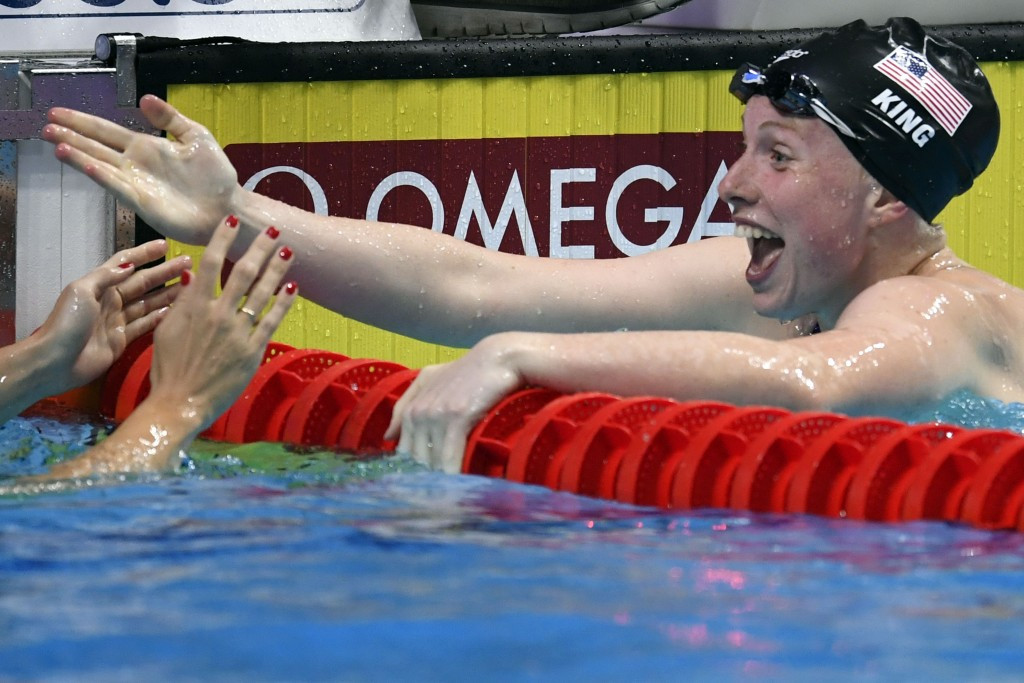 Efimova, who wagged her finger at King after winning her semi-final, paid for a slow start in Budapest and was never able to close the gap to her American rival.

King charged to victory in 1min 4.13sec to repeat her Olympic success and slice 0.22 off the four-year-old world record held by Ruta Meilutyte of Lithuania.

It reignited a rivalry which first emerged at last year's Olympic Games.

Efimova was only granted permission to compete shortly before Rio 2016 by the Court of Arbitration for Sport.

She was initially barred due to an International Olympic Committee rule banning Russian athletes who had served doping suspensions.

The four-time world champion was banned for 16 months in 2013 after failing for the anabolic steroid hormone dehydroepiandrosterone - or DHEA - the previous year.

Efimova further fuelled the flames in recent weeks by releasing a range of signature t-shirts, including one which bears the slogan "Go to CAS".

It was firmly America's day, though, as Katie Ledecky claimed a 12th world title by romping to victory by a stunning 19 seconds in the 1,500m freestyle.

She narrowly missed her own world record by touching in 15:31.82.

Sun Yang of China also took a second gold of the Championships today by completing the 200 and 400m freestyle double.

Kylie Masse also claimed gold and a world record in the 100m backstroke.

The Canadian profited from the withdrawal of home Hungarian hope Katinka Hosszú after the heats to win in in 58.10.

Kathleen Baker took US silver in 58.58 as Emily Seebohm clocked 58.59 for Australian bronze.

US duo Matt Grevers and Ryan Murphy took silver and bronze in respective times of 52.44 and 52.48.

Adam Peaty set two world records in the heats and semi-finals of the 50m breaststroke.

The Briton clocked a stunning 25.95 in the semi-final, the first sub-26 clocking in history, after posting 26.10 earlier in the day.

He has already won the 100m title in Budapest.