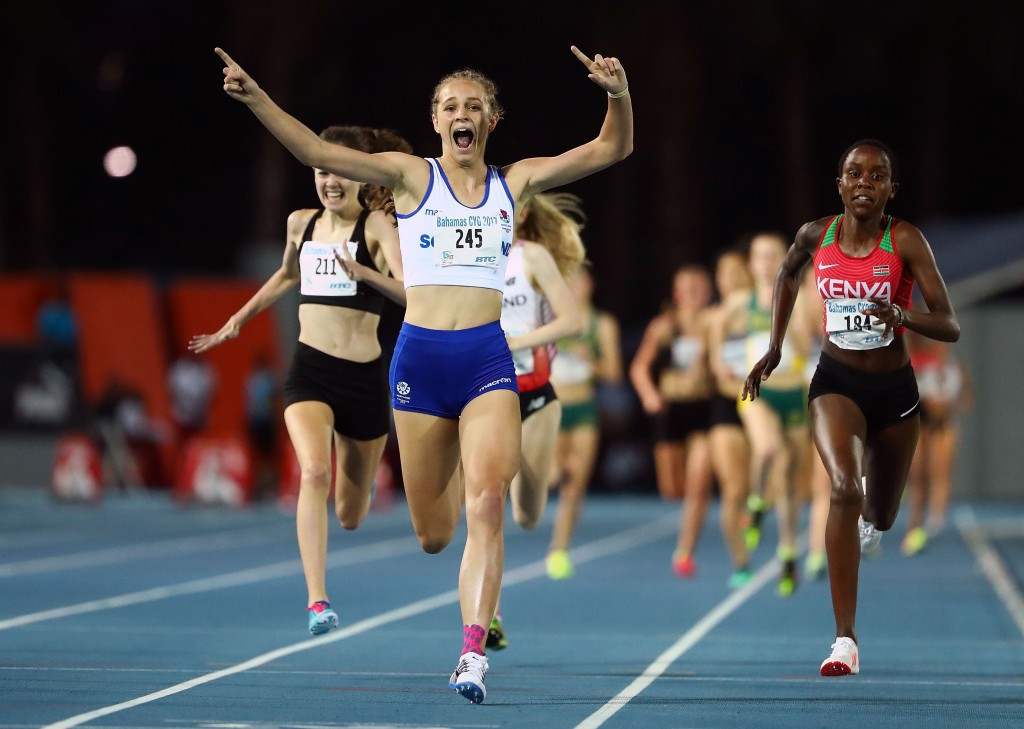 Scotland's Erin Wallace stole the show on the opening night of athletics as she won the gold medal in the girls' 1500 metres with a superb performance here tonight.

The 17-year-old from Newton Mearns clocked 4min 16.61sec, more than four seconds quicker than the time recorded by Ethiopia's Lemlem Hailu on her way to the World Under-18 Championships title in Nairobi earlier this month.

Wallace timed her late surge perfectly as she sprinted past Kenya Viola Chemutai in the final stages of the race to claim a memorable victory.

Chemutai was forced to settle for the silver medal in 4:16.73, while Katrina Robinson of New Zealand took home the bronze medal.

In a further demonstration of the strength of performances in the girls' race tonight, all of the top four times would have been enough for World Under-18 gold.

Wallace, who is also a talented triathlete, was not able to compete in the Kenyan capital as Britain were among six countries to withdraw from the event due to security concerns.

Adell Colthrust made history for Trinidad and Tobago as he secured the country's first-ever Commonwealth Youth Games gold medal by winning the boys' 100m in a time of 10.55sec.

Colthrust sprinted his way into the record books and crossed the line ahead of Jamaican Kevon Stone, who clocked 10.59.

Adrian Curry delivered a medal for the host nation as he came through to take bronze.

Julien Alfred delighted the considerable Saint Lucian contingent inside the stadium as she claimed the girls' 100m honours in 11.56.

Alfred held off the challenge of Australian Louise Riley, who sealed the silver medal, and Deondra Green of Canada won the bronze.

Bell channeled the spirit of Dame Valerie by comfortably topping the podium as James Tomlinson of Wales was three centimetres adrift of his mark in silver medal position.

Djimon Gumbs claimed a rare medal for the British Virgin Islands as he did enough for bronze.

England's Holly Mills leapt a best attempt of 6.19m to win the girls' long jump, an event which also produced a bronze medal for the nation thanks to Lucy Hadaway.

Sandwiched between the two English athletes on the podium was Tatiana Aholou of Canada, who claimed the silver medal.

Canada's Trinity Tutti dominated the girls' shot put event as she put in a commanding display, throwing 17.82m to beat Sarah Omoregie of Wales and Styliana Kyriakidou of Cyprus.

Athletics at the 2017 Commonwealth Youth Games is due to continue tomorrow when there will be a further five finals on the programme.